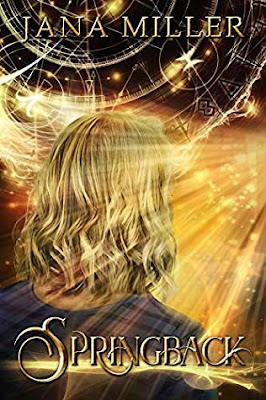 Ever since discovering her ability to rewind time seven years ago, Chloe has been reaching—for a worthy use of her ability, for redemption from her past, and for the kind of validation she’ll never find as long as she has to keep this secret.

By the time she’s sixteen, Chloe has decided that rewinding is not a gift at all, but punishment for her part in the tragedy that has shaped her life for so many years. And when she discovers others who possess the same ability, she has no idea whether she can trust them--or the information they offer about her own history.

Secrets of the past combine with rivalries of the present to set off a series of painful events and impossible discoveries, and soon Chloe finds herself in a race to piece together a puzzle of ancient relics, family feuds, and strands of time as she seeks to defuse the threat to her family, her powers, and the fabric of time itself.

*Note: This is a standalone novel; while there will be a sequel, the story comes to an end with no cliffhanger.

I think it's important as a reader, to step outside your usual genres and throw in something a little different.  It helps keep things fresh and balanced.  This book was definitely outside my usual genres and probably not something I would gravitate to on my own.  This is a YA book, on the younger side of YA and probably even fitting for a middle grade reader.  It is clean- no swearing, no sexual content.  There isn't even any type of romance at all.

So, there were some things I really liked, some that were okay and some things I didn't like.  I really liked the "rewinding" idea.  Being able to go back in time to fix something or alter something.  I can think of many times I wish I could've had that power!  The author did a great job of creating a visual for me of how the characters were accomplishing that.  I also really liked that there were rules of sorts- parameters set within that ability.  Consequences even.  It made the idea seem more valid and possible because of those things.

I was so interested in the first bit of the book.  It was new and fresh and I was wholly invested in Chloe and Jake meeting, rewinding, meeting, rewinding etc..  The middle part of the book got a bit slow.  There isn't a lot happening and the forward progression is, for lack of a better word, slow.  The last handful of chapters of the book pick up and things start happening faster which was good.  The story needed some climactic build up.  Most of it is at an even level.

I think the thing I had the hardest time with was the emotion.  When you don't have strong emotional connections happening, it's harder to invest your own emotions.  I didn't feel an emotional pull to any of the characters.  They were likable but nothing really drew me into them.  If you don't have strong characters with lots of emotion, you better have a gripping, fast moving plot to make up for it.  I didn't really get either of those things.  BUT, I think this book would be great in the hands of the younger crowd or for parents to read with their tweens.  It sparks the imagination and gives plenty of room for conversation about what you might "rewind" and why.

- I picked this book up on KU
Posted by Getting Your Read On at 4:00 AM