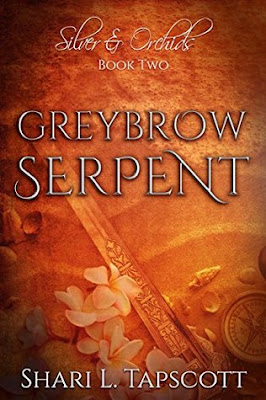 The captain of the Greybrow Serpent is the last man Lucia’s willing to trust. But he’s the only one who can save her. Lucia’s dreamed of finding Avery for a solid two months. In every one of her fantasies, the dashing captain has been on the deadly end of her dagger. Unfortunately, their reunion is not all she hoped it would be. The captain is back, but he comes bearing news: the Duke of Mesilca holds a grudge, and he’s set a bounty on their heads.

Now Lucia’s running from bounty hunters, partnering with a man with the morals of a snake, and forcing Sebastian to court Adeline in a desperate attempt to keep the innocent seamstress safe.

Captain Greybrow is the only one with a solid plan, one that will take Lucia into the heart of forbidden, siren-inhabited waters. But after Avery’s betrayal, can Lucia find a way to trust him again? It won’t be easy, especially when it appears the captain has yet another hidden agenda.

Yup.  I've been reduced to noises.  Those are lovey noises though, if you couldn't tell.  I LOVED this book.  I was so caught up in it- fully invested and watching the scenes unfold like a fantastic adventure movie in my head.  It's no secret that I love Shari Tapscott's writing.  It really settles in with me and as a reader, that feels fantastic.  Shari is an auto buy for me any and every time.

I first fell in love with Shari's Eldentimber Series.  That series is one of my favorites.  It's the perfect series for YA and adults alike.  It's clean and just so adventurous and fun.  If you haven't read any of these books, you really, really should.

And this new series?  Oh my.  I'm in.  One hundred percent in.  The first book (and prequel) were so good but this book?  More emotions come into play- more intense emotions.  Avery Greybrow was a key player in book one but took a somewhat secondary role to Lucia and Sebastian.  In this book, Avery becomes more of the focus while Sebastian takes a more behind the scenes role.  It's amazing to me how the author shifted my emotions and devotions in this book.  Crazy.  I was thinking about this book long after I finished it and I was sure wishing I didn't have to wait for the next book.  UGH!!  It definitely left me hanging, dangling, right over that cliff.  (which I don't like, really)  BUT.  I'll be desperate to get that next book in my hands!

This book is quite the adventure.  Adventure on the high seas.  It has fantastic pacing and like I said before, played out just like a movie in my head.

This series is on Kindle Unlimited if you have that!!  YAY!

- I received a complimentary copy of this book but have also purchased my own copy.
Posted by Getting Your Read On at 8:50 AM