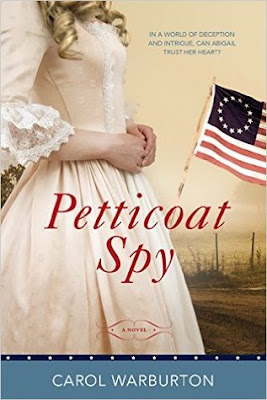 
Abigail Stowell is a rarity for her time. The comely young woman is educated, outspoken, and attuned to the charged political climate around her. She is a staunch Patriot. In short, she is a rebel. So when Gideon Whitlock, an avowed Tory, rides into her village, Abby is not only put off by his politics and arrogance but is also annoyed by her undeniable attraction to him.

When she observes a clandestine meeting between her Patriot father and Gideon, Abby soon realizes that in a world divided by loyalties, not everything is as it seems. Soon she is drawn deeper into political intrigue than she ever dreamed possible. And just as feelings begin to heat up between Abby and Gideon, the shot heard round the world ignites the beginning of war between the colonists and the British redcoats. There is no time for hesitation, and Abby finds herself thrust into a world of intrigue, treachery, and terror. Lives hang in the balance, and Abby will stop at nothing to support the Patriot movement—but will her allegiance to the cause mean losing the man she loves?

I've been reading a lot of regency novels lately and this book was a refreshing change in scenery.  I love books set during important times in history and this one takes place just before the Revolutionary War in America.  The Patriot movement is increasing and strengthening and Abigail Stowell finds herself right in the middle of it.

Abby is a strong and determined girl.  She has a keen mind and desperately wants to be a part of the cause she so strongly believes in.  This leads her to a few impossibly difficult situations but with the help of good friends she manages to get through.

The story flowed so well.  It gave me a chance to know all the characters, their strengths and weaknesses but kept events happening and momentum building so that I never grew bored or disinterested.  With every turn of the page I felt my anxiety increasing because I just knew something bad was going to happen but I didn't know when and I didn't know how Abigail and Gideon could possibly get out of the mess they were in.  I desperately wanted to know and to get to the end for my own resolution.  It is always so good to be compelled to read on and not want to put a book down.  :)

If you love historical fiction, you don't want to miss out on this book!

-I received a copy of this book from the publisher.  All opinions expressed are my own.

a Rafflecopter giveaway
Posted by Getting Your Read On at 8:52 AM