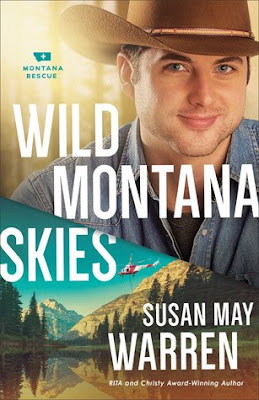 Search and rescue pilot Kacey Fairing is home on leave in Mercy Falls, Montana, twelve years after she joined the military to escape the mistakes of her past. With a job waiting for her as the new lead pilot of Peak Rescue in Glacier National Park, Kacey hopes to reconnect with the now-teenage daughter she sees only between deployments. What she doesn't realize is that someone else is also back in town.

Ben King has been building his country music career since the day Kacey shut him out of her life. Now all of that's on hold when his injured father calls him home to help run Peak Rescue until he's fully recovered. It doesn't take long, though, to discover his father's ulterior motives as Kacey Fairing walks into the house and back into his heart.

With Mercy Falls in a state of emergency due to flash floods, Kacey and Ben are forced to work together to save lives. But when floodwaters turn personal, can they put aside the past to save their future?

I don't know what it is about these books, but I am hooked.  It all started with the Montana Fire series that revolved around smokejumpers.  I LOVED that series.  I was so happy to see this off shoot series from that one.  Some of the characters cross over and it's fun to see them.  Susan May Warren writes these books in a way that just settles in so easy with me.  I love the romance and the adventure/suspense together.  By the end of the book I feel like I know these characters and I am invested in their success.

This series is about a search and rescue team in the small town of Mercy Falls, Montana.  The setting is perfect for this with National Parks all around.  This story is mostly about Ben and Kacey but there is a secondary story line happening as well.  Ian and Sierra's story starts in If Ever I Would Leave You: A Montana Rescue Prequel.  (which is free on Amazon as of when I wrote this.)  But it doesn't have a conclusion.  They are featured in this novel but STILL don't reach a conclusion.  I guess they are the couple with the eternal struggle.  It was awesome to read the prequel before this novel though to get a good sense of who Ian and Sierra are and how their relationship started and evolved.  It also set the stage for the Mercy Falls rescue team.

Ben and Kacey are a love story gone wrong.  Their love story began early when they were both young.  Circumstances tore them apart but now they have been brought back together with a common job task.  You can feel the tension and the connection these two have.  It's just a matter of finding their way through the murky waters of the past.

I'm so excited about this new series.  I can't wait to read the next book which is scheduled to come out in January.  Yay!

Content:  mention of previous sexual relationship outside of marriage, some mild suspense and violence.  Christian fiction, some moments that have a "preachy" feel to it.

--I received this book for free from the publisher. A favorable review was not required and all views expressed are my own.
Posted by Getting Your Read On at 9:01 AM