The Captive Heart by Michelle Griep 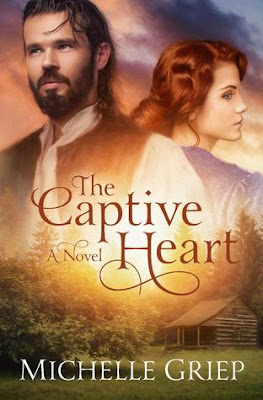 Proper English governess Eleanor Morgan flees to the colonies to escape the wrath of a an angry duke. When the Charles Town family she’s to work for never arrives to collect her from the dock, she is forced to settle for the only reputable choice remaining to her—marriage to a man she’s never met. Trapper and tracker Samuel Heath is a hardened survivor used to getting his own way by brain or by brawn, and he’s determined to find a mother for his young daughter. But finding a wife proves to be impossible. No upstanding woman wants to marry a murderer.

There was so much to love about this book!

First there are the characters, Eleanor and Samuel.  At first I wasn't sure about either of them but as the story went on, I grew to love them.  They are so very different from each other but I love the whole opposites attract thing.  :)  Both have so much determination though, and it shows in everything that they do.  Samuel comes off so gruff and mean in the beginning.  I didn't figure there was any way I was going to love him but he grew on me and even though he was a bit caveman-ish with a severe communication problem, I found myself liking him.  In the end.

I loved the various settings and challenges this story brought.  It was full on western frontier hardships from fire and outlaws to bears and the Indian relations of that time.  Throw in some crazy men with vendettas, a jealous woman and an active toddler and there is never a dull moment.

It took me a bit to actually get into this book because it started out slow but once things started to pick up, I was fully invested and interested.  I enjoyed this one!