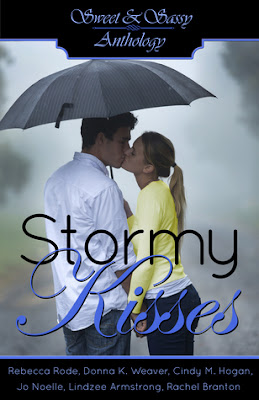 Will extreme weather keep these six couples apart or bring them together? Sweet & Sassy Anthology: Stormy Kisses has six contemporary romances set against wild weather from award winning and Amazon best selling authors.  Love Rightby Rebecca RodeCorie McMullen doesn’t consider herself a man-hater. It’s just that being dumped by a fiancé via text has given her trust issues. Now, two years later, she’s written a bestselling relationships book, Love Right, and managed to avoid dating altogether. Even better, she’s scored an interview on a prestigious national morning show.So when her best friend, Sofia, drags her to Singles Week at a ski lodge in Colorado, she’s reluctant to jump into the dating scene again. Especially when the man who seems interested turns out to be Micah Calloway, a playboy from her high school who insists he’s changed.Then a blizzard hits while they’re snowshoeing, and the dating game turns dangerous. Now Corie’s very survival rests on an impossible decision. Not only must she trust Micah with her life, but somehow she must find the courage to trust him with her heart. Waves of Deceitby Donna K. WeaverTwenty-six-year-old Shelby Nash wants to break free of her controlling, billionaire father. With the completion of one more project for his company, she can branch out on her own. However, her ex-boyfriend’s been appointed as the new lead architect. She has to find a way to protect her heart from him while avoiding whoever’s making anonymous threats.Wade Armstrong did a poor job handling the news about the identity of his girlfriend’s father. Shelby walked out of his life without another word. Finally, four years later, Wade has a chance to win her back. As long as whoever’s targeted her doesn’t get to her first. Secrets in the Stormby Cindy M. HoganHigh in the Canadian Kananaskis National Forest, super spies, Christy and Jeremy try again for a romantic getaway, in hopes that their remote destination will give them a long awaited private holiday.Unfortunately, someone else has found shelter in the same abandoned lodge, but with much more nefarious intent. Christy and Jeremy set off, determined to get the evidence into the right hands in Calgary.But a violent flash storm rolls in, as well as a beautiful girl from Jeremy’s past. Combined, they threaten to not only help the terrorists have their way, but also to end the relationship between handler and spy for good as jealousy and distrust come between them. Back to Youby Jo NoelleZara Hollis never thought at twenty-three she’d trade in her passion for hiking and spelunking to run a mortuary and care for her mother, who has advanced Alzheimer’s. When Trevor Cooley, all grown up and gorgeous, moves back to town, Zara is drawn to the quiet man who used to be her childhood friend, but now in a much more than friendly way.Trev wants to pull Zara, as fun-loving and beautiful as ever, back into his life and hopefully into his arms. But there’s a problem. He’s only in Colorado for a short time on a stint as an undercover boss. He and his company can’t afford distractions. When the two get stranded together, sheltering from a violent storm, Trev realizes this particular “distraction” may jeopardize not only his plans, but also his heart. Twisters and Textbooks (a Sunset Plains romance novella)by Lindzee Armstrong. After the death of her parents, chasing tornadoes is the only thing that makes Lauren feel alive. Each storm gives her the adrenaline rush she craves, but it can’t make her forget Tanner, the country boy she left behind in Oklahoma. When a funeral brings Lauren back to Sunset Plains, she decides to seek out Tanner in a desperate attempt to finally let go of her past. He’s still angry by her abrupt departure from his life, and she begins to question whether she ever should’ve returned.Just as Lauren’s about to run—again—a tornado hits near town, and Lauren and Tanner are caught up in a cyclone of emotions neither is sure they want to escape. Can they weather the storm of their past, or will they let it consume them? Zoey’s PlaceBy Rachel BrantonCaring for the animals at Safe Haven Exotic Wildlife Sanctuary has filled the holes in Zoey Morgan’s life and smoothed the memories that still haunt her. It helps that she works with friendly Stephen Carey, whose uncle owns the Arizona sanctuary, and Declan Walker, who is as wild and untouchable as the animals they help.When a storm hits, flattening buildings and flooding roads all over the state, the sanctuary goes into lockdown mode. But Zoey learns that her younger sister is lost in the storm, and she will risk anything to find her. So will the man who loves her—if she’d let him. Can he slip past the walls Zoey has built to hide her secrets?Zoey’s Place is a stand-alone novella telling the story of the now-grownup orphan that readers first saw in Rachel Branton’s House without Lies.

This was such a fun collection of novellas.  I'm very familiar with all but one of these authors so it was a treat to delve into this book.  Secrets in the Storm and Zoey's Place are both spin off novellas from full length novels by the authors.  The characters in both books appear in other books.  I haven't read anything by Rebecca Rode so I'll be looking into her other books now that I've had a sample.  :)

I loved how different each novella felt.  There was romance in all of them but each one also had some sort of suspense, action or danger as well.  It was fantastically diverting!

One of the great things about novella collections is that you can plow right through them (like me), or you can read one at a time, (just a nibble) here or there.  Whatever your circumstances allow.  It's a great way to be introduced to new authors who you might enjoy.

As of right now, this book is only .99 cents to buy on Amazon for kindle.  That's a bargain deal!  If you have kindle unlimited, you can read this book free!  :)  Yay!!

--I received this book for free. A favorable review was not required and all views expressed are my own.
Posted by Getting Your Read On at 8:06 AM