The Sheriffs of Savage Wells by Sarah M. Eden 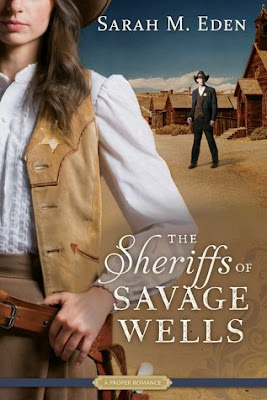 He's the most fearsome sheriff in the West. A force to be reckoned with. The stuff of legend.

Paisley Bell knows the eccentric people of Savage Wells. From the absentminded shopkeeper who always thinks she's been robbed to the young man who has returned shell-shocked from the war, Paisley has compassion for them all. When the sheriff up and leaves town, Paisley steps up and assumes the responsibility, partly because she loves the work, but also because she needs the income to take care of her sick father. So when the town council decides that the position of sheriff should really go to a man, Paisley finds herself fighting to prove that she's the perfect candidate for the job, even though she wears a skirt.

Cade O'Brien is heartily sick of shooting people. In his many years as a lawman, Cade has seen his share of blood and violence. So when he answers an advertisement for a sheriff job in the sleepy town of Savage Wells, he believes he's found the peace and quiet he's always desired. But when he discovers that his biggest competition for the job is a woman, he begins to question his decisions.

Tension between the two begins to sizzle when both Cade and Paisley realize the attraction they have for each other, but when Paisley's former beau shows up in town, along with a band of bank robbers, the blossoming relationship between the two sheriffs is tested. They will have to work together to thwart the bank robbers and keep the town safe.

All I have to hear is "Sarah Eden" and I'm in.  I don't care what genre it is, or how long the book is.  I'm in.  Sarah is a fantastic writer.  She knows how to create characters that feel natural and real, and places that feel like home.

This book steps outside what I have had from Sarah Eden so far but like I said before, it doesn't matter.  Sarah can write any genre and be fantastic.  This book is set in Wyoming in the small and simple town of Savage Wells.  There were a lot of characters in this book but not once did I feel overwhelmed by them.  It felt more like meeting them myself and each character added to the overall feel of community in the book.

Cade and Paisley were both fantastic characters.  They complimented each other perfectly even though they don't realize it at first.  I love how determined Paisley was to prove herself equal as a woman.  She was so good at standing up for what she thought was fair and right while being kind and so considerate of others along the way.  She took the time to really know and understand the people around her.  And Cade?  The man of all men because he let Paisley be who she wanted to be.  He gave her support and encouragement where there was so little of that in Paisley's life.  But the best thing about Cade?  He listened to other people who knew more and took that information in to make himself better.  Smart man right there.

There were some harder issues surrounding these two but it never bogged down the lighter feel of things.  The banter between Cade and Paisley is so fun.  The sparks fly all over the place!  I just really loved this book.  It was so easy to settle in with and I enjoyed every minute I had in Savage Wells with Cade and Paisley.

Posted by Getting Your Read On at 7:08 AM