In Tune With Love (A Year of Weddings) by Amy Matayo 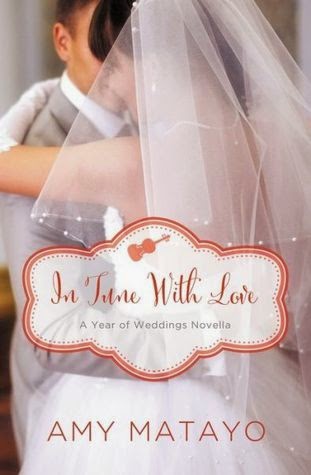 April is willing to do anything for her sister’s wedding—until she comes face to face with a guy from her past.

April Quinn is thrilled to be her sister’s maid of honor, until the wedding coordinator quits and the responsibilities get dumped on her. It’s April’s worst nightmare—especially since her sister has more objections and opinions than a lawyer presenting a high-profile court case. When the wedding singer walks out at the last-minute, her sister hires a replacement. When April finds out who the replacement is, she’s ready to call it quits as well.
Because there’s only one person in April’s past that she never wanted to see again, and her sister just handed him a front row seat to the wedding.

Jack Vaughn finally has the career he’s always wanted. After playing in bars and singing in weddings as a struggling musician for half a decade, he’s just released his second album and sales are skyrocketing. But while visiting his parent’s Nashville home the weekend before his first headline tour, he runs into an old friend. When she asks him for a last-minute favor, he can’t bring himself to say no. Even though saying yes means he has to come face to face with April Quinn—the girl who hasn’t spoken to him in years.

And rightly so, since he stole something from her that he’ll never be able to repay.

Amy Matayo is one of my new favorite authors.  I'm always on the lookout for a new book from her so I can snatch it up and read it.  And yay for Goodreads where one of my book friends read and reviewed this book.  I ran over and grabbed it for myself so I could review it too.  My thanks to the publisher, Zondervan for allowing me to read and review this title for them via NetGalley.

This was such a fun novella.  My only complaint is that it ended way too soon.  I wanted more of Jack and April.  A lot more.

Poor Jack really did steal something from April that he cannot repay.  But, he's determined to try to make it up to her.  April is good at resisting.  She has years of resentment built up and that isn't easy to break through.  It was a fun battle to watch.  The interactions between April and Jack are great.  They made me smile.  The grocery store scene was classic.  It was nice to see the guy in the embarrassing position instead of the girl.  Ha!

This book was sweet, clean, and romantic.  The attraction was there, the tension was there and the conflict was there.  You have to wait until the VERY end to get that first kiss but it's worth the wait.  :)

In Tune with Love is part of the Year of Weddings Novellas.