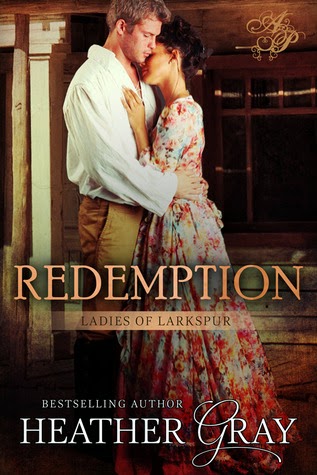 Minnie's impulsiveness has been getting her into trouble her whole life. She never expected it to land her on a suspect list for murder, though. With nothing left but a few trunks of possessions and her own defeat, Minnie leaves San Francisco behind and returns home. In an effort to protect her family and friends, she keeps them in the dark about the ongoing investigation and the possibility that danger may have followed her to Larkspur. When events force her to trust someone with her secrets, she turns to the sheriff and finds both a friend and an ally.

It may have been four years since he last saw Minnie, but how could he ever forget her? When Art finds her sneaking through a back alley in town, he knows something's wrong. The once vivacious Minnie is a mere shadow of her former self, all sparkle gone from her eyes. Art knows that time spent with her will be dangerous to his heart, but he can't turn Minnie away. Even if it means protecting her from her own impetuous decisions, he vows to keep her safe.

In her attempt to take responsibility for her own choices, Minnie shut out her friends, family, and God. An unsolved murder isn't all that's chasing Minnie, though. Will she find her way back to the heart of her faith before it's too late?

This isn't the first book that I've read by Heather Gray, but I certainly liked it better than the first one I read.  This book is categorized as a Historical Christian Fiction Romance.  That's a lot of categories, right?  While it is Christian fiction, it's very light on the Christian elements.  It has a very slow building romance that starts first as a friendship.

I think what I liked about this book was that there was the added element of suspense added in.  It gave me more to focus on and made the story more exciting.

Minnie is impulsive and she is also quite determined.  Her impulsive nature has landed her in a bit of a mess but it is that determination that will help get her out of it.  Art is a classic western hero.  Strong and sure.  I like that Art is smart too.  He thinks things through and he isn't so cocky as to realize that he doesn't always know everything.  When others know more he is able to use their help which makes him better.

This was an overall enjoyable book.  It was light, easy reading that was perfect for a rainy day at home.  It was squeaky clean too.  Yay!

This title is being published through Astraea Press.  My thanks to them for allowing me to read and review titles for them.