Defy by Sara B. Larson 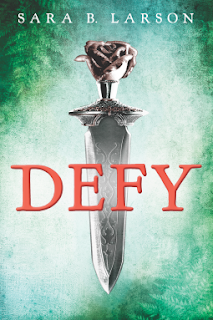 A lush and gorgeously written debut, packed with action, intrigue, and a thrilling love triangle.

Alexa Hollen is a fighter. Forced to disguise herself as a boy and serve in the king's army, Alex uses her quick wit and fierce sword-fighting skills to earn a spot on the elite prince's guard. But when a powerful sorcerer sneaks into the palace in the dead of night, even Alex, who is virtually unbeatable, can't prevent him from abducting her, her fellow guard and friend Rylan, and Prince Damian, taking them through the treacherous wilds of the jungle and deep into enemy territory.

The longer Alex is held captive with both Rylan and the prince, the more she realizes that she is not the only one who has been keeping dangerous secrets. And suddenly, after her own secret is revealed, Alex finds herself confronted with two men vying for her heart: the safe and steady Rylan, who has always cared for her, and the dark, intriguing Damian. With hidden foes lurking around every corner, is Alex strong enough to save herself and the kingdom she's sworn to protect?

Ooh, this was a good one, guys.  I started reading and was immediately pulled in.  I love when books grab me from the very beginning and don't let go.  I was about 2 chapters in when we sat down for dinner.  My husband asked if it was a good book and I replied that it looked like I would be staying up late reading.  :)  That always means a great book is in hand.

Alexa is a fantastic character.  Strong, loyal, brave.  She does what she has to in order to survive.  Her battle skills have earned her respect and a place on the prince's guard.  I just loved her.  Even though she was so strong and skilled, posing as a male, she never felt unreal to me.  Her thoughts give her away as also being compassionate and feminine too.

The story presses forward at all times.  The intrigue and danger give this book an edge- evil sorcerers and so many different sides that you aren't quite sure who is really against who. I am really not a fan of love triangles but this one didn't get over the top for me.  Alexa wasn't really wishy washy- she can't help it if two boys love her.  haha  I can see it might become more of a triangle in future books though.

I'm really looking forward to the next book!  This is a series I will be following for sure.  My thanks to Scholastic for allowing me to read this book and review for them.

Content:  a couple instances of mild swearing, a scene in a house (and references to that place) that keeps girls and forces them into pregnancy to build up the king's army.  Some violence.

This book won't be released until Jan. 7th- but you can pre-order!  :)  Here is the link to Amazon.
Posted by Getting Your Read On at 4:00 AM