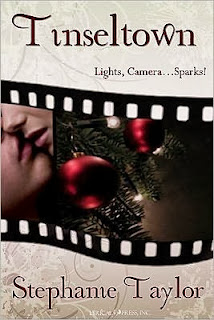 A-list actress Deb Atkins hasn’t allowed her glamorous lifestyle to go to her head. She owes this to her wonderful family, who keeps her grounded. So, for Deb, not just any man will do, especially if he’s part of the Hollywood elite. Most actors have one thing on their mind, and happily ever after isn’t it.

Until she meets Zach Sparks, her new co-star.

Zach Sparks is famous not just for his acting skills, but his quick wit and good looks. One glance at Deb, and he's smitten. After a drunken night at a Vegas premiere after-party, one thing leads to another. The result: marriage.

Deb is appalled by her actions. So much so, she and Zach can't get along on the set. Their director demands they spend Christmas holidays together to work out their differences or they're both fired. Driven by selfish motivations, they don't expect to fall in love over Christmas or for their marriage to turn into a real one. But can their tenuous relationship withstand a bigger test than either of them ever imagined?

The story line was good.  I like the marriage (I wouldn't call it so accidental) and the struggle both characters face in deciding to either work it out or trash it.  I'm not so sure that each were driven by selfish motivations, maybe just Deb.  Zach seemed to want the marriage and love from Deb from the very beginning even though he had to pretend not to for fear of having Deb freak out.

I enjoyed Zach's character a whole lot more than I did Deb's.  She was seriously not very nice to Zach for a whole lot of the book.  That guy seriously had his work cut out for him in trying to prove himself to her.  She just never believed him, no matter what he did.  It was sad.

That said, this book was definitely pushing my comfort level in the clean romance zone.   While there was no described sex scene, there was an awful lot of sexual talk, sexual innuendo, and even sex without description.  This is probably the first Astraea Press book that has pushed the boundaries for me.  I'm not sure I would label this book as "clean" but it did have some great tension, witty moments and a great happily ever after.  :)
Posted by Getting Your Read On at 4:00 AM