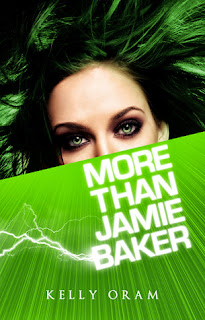 Jamie Baker, the only girl in the world with superpowers, has now accepted who she is and learned to control her power. Not to mention she has the best boyfriend on the planet. Life is finally looking good. But the day she witnesses an accident and decides not to save the guy out of fear of being exposed, she realizes that simply being Jamie Baker isn't enough.

After seeing Jamie so wrecked with guilt, the ever-helpful Ryan Miller decides it's time to make all of his fantasies about turning his girlfriend into an honest-to-goodness superhero become a reality.

Of course, coming up with a decent Super Name and fending off all of Ryan's attempts to get her into spandex aren't the only problems Jamie faces. The more her alter ego starts to make headlines, the harder it becomes for Jamie to hide her extracurricular activities from her best friend, the government, radical scientists, and the mysterious new guy who is determined to steal her from her boyfriend.

It all started off so nicely.  And then...it got better.  I was totally into it.  Ready to take on the world with Jamie.  I'm so there.  And then you had to go and do THAT.  Whatever.  Let's just hope and pray that you are well on your way to finishing the next book because that ending was just MEAN!

Is that my review?  Yes.  It totally is.  (to say more would be to give things away and I'm not that kind of girl.)

Content:  steamy kissing, implied but not described sex, mild swearing.
Posted by Getting Your Read On at 4:00 AM