A Review of Mile 21 by Sarah Dunster 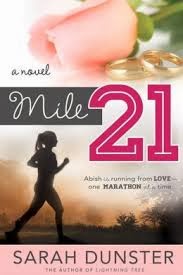 The singles ward is the last place Abish wants to be. But after the unexpected death of her husband (and after being kicked out of her mom’s place), she has to move into single-student housing to finish up her schooling. Maybe training for a marathon and winning the heart of the handsome executive secretary are exactly what Abish needs to get a personal best.

There is no doubt that Abish has been through a great deal.  Being a newlywed and losing your husband would be so hard.  Abish has another heartache as well that adds to her overwhelming sense of loss.  (you'll have to read to find that one out)  Obviously Abish is facing huge obstacles to overcome.  Not unlike so many of us at different times and places in our lives.

Here's the thing though.  To me, Abish was just mean.  Does heartache and loss give someone the right to treat everyone around them like crap?  Don't get me wrong, I know heartache.  I know plenty of other people who know similar heartache to Abish.  But they never got mean.  Yes, everyone is different and deals with loss differently.  Yes, Abish had a rough time of it but her own actions led to more hardship than she ever needed to have. She got kicked out of her apartment because she failed to live up to her end of the bargain. She was rude and mean.  She used people.

For most of the book I didn't like Abish and that is hard as a reader.  I want to connect with the characters and I did feel empathy for her situation but unfortunately, her negative thoughts and actions overpowered that most of the time.  Abish doesn't want to be judged but she judges harshly herself.  And did I mention that she is mean?  She is.

Abish does start to redeem herself and thank goodness for the people in her life that don't give up on her and just let her wallow forever in her misery and meanness.  I think almost everyone around Abish demonstrates patience, kindness and forgiveness in excess.  Abish learns some important lessons as she emerges from her misery and begins to pay attention to others again.  Abish realizes that she has treated other poorly.  She starts to realize she isn't alone in the hard things she faces in life.  She begins to serve others and interact. She seeks out reconciliation.  There is a lot of emotion in this book.  Not so much romance as the journey of one emotionally messed up girl.

I was happy to find the book ended on a positive note.  I needed that.  I don't think I ever totally liked Abish but she did redeem herself and the story ended with good feelings and a sense of overcoming and triumph.

This is an LDS fiction book.  There are doctrinal topics mentioned that many not familiar with the LDS faith might have a hard time understanding.

You can purchase Mile 21 at Amazon.
Posted by Getting Your Read On at 4:00 AM