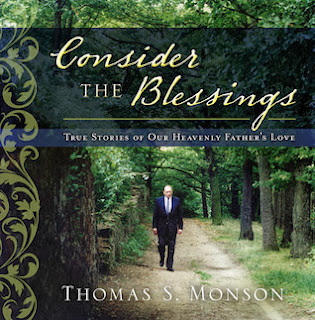 If you ask people what they love most about President Thomas S. Monson’s teaching style, chances are they’ll say something about the personal experiences he relates. The accounts President Monson shares are always true, taken from his own life or the real lives of other people. Those warm, memorable accounts have truly become a hallmark of his messages.

Who can forget the woman who saved one of the two sticks of gum Elder Monson passed out to youth in postwar Germany? Or the neighbor who returned a box of baseballs to young Tommy as a thank-you for his kindness to her? Or the father who declined to attend a “Mormon” meeting with his family but had his heart softened by a message he heard on a radio that was actually broken?

In celebration of the fiftieth anniversary of his call as an Apostle, Consider the Blessings presents fifty of the true accounts President Thomas S. Monson has shared over the years. With beautiful photographs and heart-touching content, this is a book to treasure with the whole family.

I have to say that I honestly love this book.  I read through the whole thing in two sittings.  It has beautiful pictures to go along with the wonderful stories shared by President Monson.  Most of these stories were ones I have heard before but there were a few that were new to me.  I could hear his voice as I read them.  President Monson has this way of talking that makes his voice and stories uniquely his.

As stated in the book summary, one of the things I love best about President Monson's teachings are his personal stories.  They are heart felt and endearing.  My kids always remember the stories from conference when he speaks.  To have a compilation of stories that he has shared in my home is wonderful.  I really love this book.  It makes me feel good and reminds me of how important it is to be kind and serve and help the people around me.  Kindness and love DO matter.

This is such a treasure of a book.  The holidays will be here before you know it and this book would be a perfect gift for so many people.  I know it's on my list.

You can find it for purchase at Amazon and Deseret Book.

President Thomas S. Monson was set apart as the sixteenth President of The Church of Jesus Christ of Latter-day Saints in February 2008. He had previously served for twenty-two years in the First Presidency of the Church, after having been a member of the Quorum of the Twelve Apostles since October1963. Five years after his call to the Twelve, he was given a special assignment for the work of the Church in Europe, requiring many visits with members behind the Iron Curtain. He was instrumental in the construction of the Freiberg Germany Temple and in advancing the Lord’s work in other eastern European countries that were part of the communist bloc. He also served as chairman of the Scriptures Publication Committee and supervised the process that resulted in the new editions of the scriptures. His ministry has been characterized by his compassion for the needs of individuals and his gift for one-on-one service. President Monson and his wife, Frances, are the parents of three children, grandparents of eight, and great-grandparents of eight.
Posted by Getting Your Read On at 4:00 AM