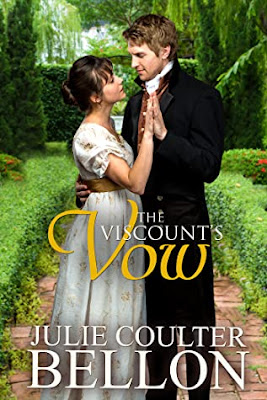 Edward Rutledge, the newly minted Viscount Carlisle, has come back from war a changed man. The echo of the battlefield and the death of his best friend Marcus haunt him to the point that he decides to break his betrothal to Charlotte---the only woman he’s ever loved.

When he’s summoned home to Hartwell Manor, he comes face-to-face with her. Slowly, her strength and love make him see that he might be able to reclaim what he thought was lost. But when word reaches him that Marcus might not have died in Spain and yet lives, Edward will do anything to bring his friend home. As the mystery deepens, however, Edward is drawn into an intrigue that forces him to confront the demons that have plagued him since he returned to England. Will he have to sacrifice everything he’s built with Charlotte in order to keep her safe?

The beginning premise of this book isn't a unique one.  In fact, when I began reading, it felt very similar to a couple of regency books I've read recently.  Man comes home from war, feels he is unworthy/incapable of love for varying reasons so he refuses the girl.  I was excited when things took a turn as Edward goes on a mission to rescue his old friend, Marcus.  That's when I really became interested in this story.  I wish there had been more intensity to that part of the story because it all ended very gently without too much fuss.  I was a little disappointed.  I also felt like Marcus changed his mind regarding marrying Charlotte easily and quickly.  His promises to Charlotte's brother seemed contradictory to what he really intended.  I don't know.  Some of that just confused me.

Edward and Charlotte are both nice characters, good people, easy to like.  The story is gentle, easy reading and the ending is sweet.  Although this book wasn't my favorite I liked it and I am a fan of this author.  Her military romantic suspense books are my very favorites.

This book is available on Kindle Unlimited.
Posted by Getting Your Read On at 8:52 AM