The Whispered Dance of Bees by Carol Warburton 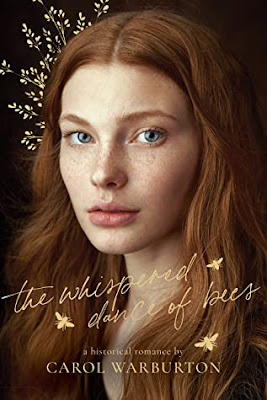 Had fate and nature not conspired, Alyce Redgrave would have been a child of wealth and privilege. But the night of her birth was shadowed by an eerie Devils Moon and her christening day marred by a fierce hailstorm—ill omens that led the superstitious peasants to seek Alyce's life. Desperate to save her infant daughter, Alyce's mother flees with her baby, finding shelter and goodwill at the isolated farm of strangers . . .

There, Alyce's life is filled with secrets, unanswered questions, and a sense of foreboding. Her worst fears are realized when she narrowly escapes the clutches of a murderer by fleeing into the forest. Fate steps in once more to change the course of her life when Alyce is found and taken in by Elspeth, a wise woman with the uncanny ability to commune with nature. Trained by Elspeth in the art of healing, Alyce remains haunted by the puzzle of her past until she discovers her mother's lost pendant. With the help of this object and the aid of the enchanting William Pascoe, Alyce finally holds the key to who she once was and who she will become.

Carol Warburton has an amazing way with words.  They weave together to create a story that comes alive.  This book really does come alive, vividly.

The story is told from two perspectives- first from Arabelle and then from her daughter, Alyce.  It really just follows their lives and honestly, most of it carries sadness with it.  The story is slow moving but not uninteresting.  It really isn't a love story as a love interest doesn't even come into play until about two thirds of the way through and even then, it's very gentle.  This story is a journey.  The journey of Alyce and the many kind people who help her along the way.

I enjoyed much of this book.  Overall though, it was a little bit too sad and a little bit too slow for me.  There just wasn't enough tangible happiness to balance out the sad and hard bits.  I will say that it didn't feel like anything else I have been reading lately.  I'm always looking for books that feel new or different and this story was definitely that.

Posted by Getting Your Read On at 7:43 AM