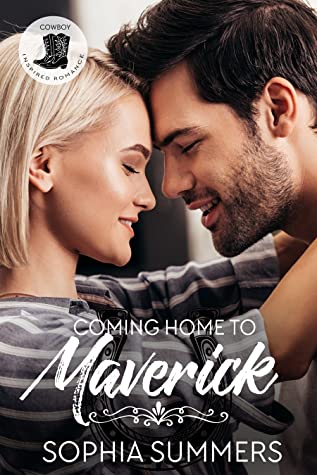 Bailey is back. Maverick thought he was over her. But neither can deny the feelings that will always be there.

Bailey has made mistakes, so many she doesn't think she'll really ever forgive herself. But her daughter deserves the kind of life Bailey had growing up. When she shows up on her parents' doorstep back to her hometown, the one person she isn't ready to see is Maverick. But will she ever be able to face him?

The minute Maverick hears Bailey is back, he knows his heart still belongs to her. But what kind of man trusts a woman who left him at the altar? As he grapples with a new daughter that he can't help but wish was his, all the responsibilities of running his family's ranch, and the hurt he feels about Bailey's betrayal, he finds new love and hope not only with her but with God.

As soon as God is a part of the equation, the sweetness they find is better than they ever had. Just maybe this second chance around is God's gift of happiness to them both.

Coming Home to Maverick is a story of forgiveness and redemption.  It is a story that will tug on your heart because who hasn't made mistakes, sometimes big ones, that require the forgiveness of others and also the hard task of forgiving yourself?

Bailey left her man at the alter without a word.  She ran off with a different man who promised her stars and she had his child.  Now she is back in a small town where everyone knows her and knows her mistakes.  That's a pretty big challenge to overcome.  I really love how the author painted the town in good light, that the people there could accept Bailey back with open arms and love, especially Maverick's family.  Maverick hears Bailey is back and his family asks how he wants to treat her.  Should they ignore her?  Shun her?  Maverick tells them to be kind to her.  And I know this is just a fiction book, but that sort of sentiment restored a bit of hope in humanity for me.  I really want to believe that people are good enough to do this and that I am too.

Maverick is something else.  If you make a mistake, he's the guy you want forgiving you!  It was almost too easy for him but I'm willing to overlook this because I really want there to be people like this out there in the world.  Maverick is kind.  He is patient.  He is loyal.  He works hard and he is all things Texas cowboy.  Yeah.  He's good.

I enjoyed this book. It was a sweet story of love and forgiveness and it felt good around my heart.  Maverick has a whole family of boys so here's to hoping we get a story for each brother.

This book is just $.99 on Kindle right now and it is also on Kindle Unlimited.

Content:  mention of intimate relations outside of marriage with no details, Christian elements including prayer, forgiveness.

- I bought my own copy of this book.
Posted by Getting Your Read On at 9:41 AM