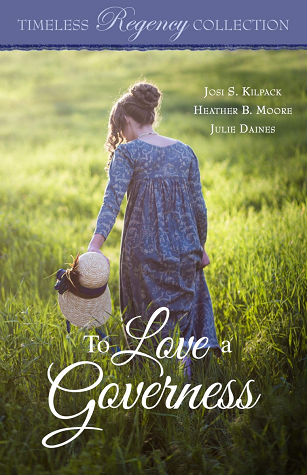 Til’ All the Seas Gang Dry by Josi S. Kilpack
It has been six years since Dina left London and David and whatever fantasy she had allowed to grow in the months of flirtation that had nearly overtaken them both. Now, David is getting married and he and his fiancé are guests at the home where Dina works as a governess. Convinced the connection they felt was nothing more than childhood fancy, Dina is taken by surprise to find that her feelings have not changed, and, she fears, David’s have not either. Still, she is determined not to interfere with the life he has worked so hard to build … until she realizes that his fiancé is not nearly as committed to him as he is to her. No one will trust her motivations for revealing the truth, not even David, and she could ruin everything she had built here, but if it spares David heartbreak, is it worth the sacrifice?

The One-Year Governess by Heather B. Moore
When Emmeline Finch's best friend becomes betrothed to the man Emmeline had picked out for herself, she decides she needs to get away for one year. Her aunt has the perfect solution. Become a governess for two children who are under the guardianship of their uncle, Captain Jasper Ridout. But when Emmeline arrives at the home, she finds the Captain not at all ancient as she assumed, but a man only a handful of years older than she, and most certainly single.

Visible by Julie Daines
Orphaned at a young age, Sarah Woolsey’s prospects for a meaningful future are grim, especially as a housemaid in the home of the handsome but aloof Arthur Selwood. When an abandoned child is left at Mr. Selwood’s door, Sarah is elevated from housemaid to governess in the blink of an eye. But with a man she’s running from closing in, Sarah is desperate to escape. Leaving would mean breaking the trust of the child she’s come to love, not to mention her growing attachment to Mr. Selwood

Happy release day to this book!

Three amazing authors have teamed up to bring these sweet stories of love that go against the rules of society.  Who doesn't love rooting for the underdog?  All three of these stories had young women who were gentle but strong and yet still what I would label as an underdog.  I loved watching love come softly to them from men who were willing to "see" them for who they really were.  Each story was ever so sweet and made me happy.  I loved each one.