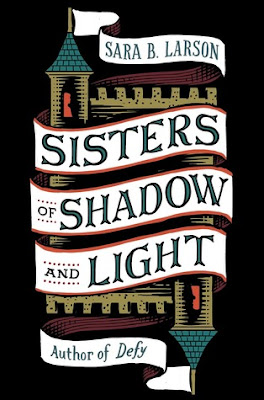 "The night my sister was born, the stars died and were reborn in her eyes…".Zuhra and Inara have grown up in the Citadel of the Paladins, an abandoned fortress where legendary, magical warriors once lived before disappearing from the world―including their Paladin father the night Inara was born.

On that same night, a massive, magical hedge grew and imprisoned them within the citadel. Inara inherited their father’s Paladin power; her eyes glow blue and she is able to make plants grow at unbelievable rates, but she has been trapped in her own mind because of a “roar” that drowns everything else out―leaving Zuhra virtually alone with their emotionally broken human mother.

For fifteen years they have lived, trapped in the citadel, with little contact from the outside world…until the day a stranger passes through the hedge, and everything changes.

Mystery surrounds Zuhra and Inara.  Secrets whose answers seem just out of reach for Zuhra who so desperately tries to take care of her sister, Inara, and gain the approval of her mother.  Zuhra carries the weight of the world on her shoulders.  I could feel her longing, isolation and her discouragement in the beginning.

After a slow start, this book gained momentum and I was pulled deeper and deeper in.  By the end I was reading so fast, desperate to know what was going to happen next.  It's hard to say much without giving things away but I loved how the story expanded.  It started out small and grew and grew to include more people, places and emotions.  It was really good and very engaging.

My biggest complaint is where the story ended- on the edge of a cliff with me hanging off.  Seriously, cliff hangers are the worst.  This is a series I would rather read after the whole thing is finished because waiting another year for the next book is crazy!  Ugh.  So far away.