Master of the Phantom Isle (Dragonwatch #3) by Brandon Mull 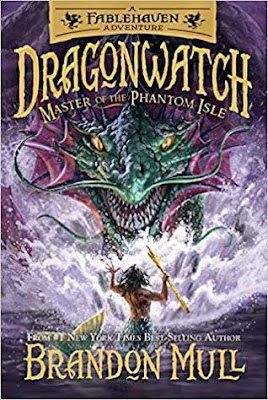 Cursed by the Key of Forgetting, Seth has lost all memory of his past—his relationships, his experiences, and who he really is. For now he will align with his new mentor, Ronodin, the dark unicorn, who takes him to the Phantom Isle, the secret gateway to the Under Realm. Though Seth is not formally a prisoner, Ronodin wants to use him and his shadow charmer powers for his own dark ends.

Kendra is frantic to find her missing brother, but the quest will take her and her companions, including Warren, Tanu, and Vanessa, far from Wyrmroost to Crescent Lagoon—a recently fallen dragon sanctuary made up of many islands and underwater domains. Its caretaker has regained a foothold on one of the islands. If Kendra and her friends can save that sanctuary, they might uncover the answers they need to rescue Seth.

With each sanctuary the dragons overthrow, Celebrant, the Dragon King, comes closer to the dawn of a new Age of Dragons. With the forces of darkness on the march, can Kendra and her allies gather enough power to win the epic dragon war?


Dragonwatch, Master of the Phantom Isle doesn’t miss a beat, picking up right where the last book left off.  The dragons are still at it, seeking domination, and it’s hard to imagine a greater threat.  Though in this adventure a greater threat does reveals itself.  Can Kendra stand against this dark threat without the help of Seth?

For Seth, life is hard when dealing with memory loss and the choices one makes under those circumstances gets to the heart of the character.  It is fun exploring Seth’s character more in depth when past choices can no longer influence the present ones.  The true desires of Seth’s heart manifest themselves.

The book takes the reader to tropical places with beaches and palm trees but it’s certainly no vacation with peril everywhere ranging from plants that want to eat you, to the undead and a raging triclops.  Yet in the midst of all the trials Kendra is still willing to give her all for her brother.

From underwater adventures, to deep and dark places from your worst nightmares, this book provides another fun read from Brandon Mull.  There are even a few surprise twists! This is a great series and adds another prized addition to the Fablehaven / Dragonwatch series.  I look forward to reading the series again; Master of the Phantom Isle gets an A+.
This is a series you must read in order as each book builds on the previous book.

Brandon Mull is the #1 New York Times best-selling author of the Fablehaven, Beyonders, and Five Kingdoms series. A kinetic thinker, Brandon enjoys bouncy balls, squeezable stress toys, and popping bubble wrap. He lives in Utah in a happy little valley near the mouth of a canyon with his four children and a dog named Buffy the Vampire Slayer. Brandon loves meeting his readers and hearing about their experiences with his books.