Among Sand and Sunrise (An American Heiress #3) by Stacy Henrie 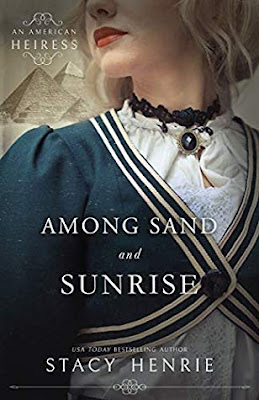 --1909--
After three failed seasons, American heiress Syble Rinecroft is more than ready to move forward in a life of independence and adventure. And what better way to begin than by taking a trip to Egypt with her grandmother and her band of widowed friends to find a hidden tomb? There’s only one catch. The archaeologist the widows insist on employing is none other than the irritating Marcus Brandt whom Syble met years ago on another trip to Egypt. If Syble has any hope of finding the tomb and being known for something other than too vivacious to make anyone a suitable wife, she’ll have to learn to work with Marcus.

British archaeologist Marcus Brandt has only ever wanted one thing—a discovery in Egypt that will bring him the acclaim that has eluded his career. Such a thing will surely be found in the tomb he is presently clearing. So when his wealthy patroness and her friends, including Marcus’s grandmother, seek his help in finding a hidden tomb, he’s reluctant to agree to the new dig. Especially when it involves daily interaction with Syble Rinecroft, the annoying adolescent he met eight years ago.

Compelled to do the dig for different reasons, Syble and Marcus finally agree to work together, in spite of their opposite approaches to life. As the days pass, though, they discover there may be more to each other and their growing friendship than either expected to find. And yet, opening their hearts might just cost them their dreams.

This is the third book in this American Heiress series by Stacy Henrie.  Each book can stand alone easily so don't worry if you haven't read the others but do add them to your read list as they are both great stories!

I loved the setting for this story.  Egypt is so foreign to me and the excitement of the 1900's when people were discovering all the ancient ruins and tombs makes this book so fascinating.  Can you imagine finding and walking into an undiscovered tomb full of treasures and history?  Wow.  How amazing that would be?  I felt some of that amazement through the eyes and thoughts of the characters in this book and I loved it!

This story is slow and gentle.  There isn't anything heart pounding or climactic about it.  It follows Syble and Marcus as they learn about each other while working together on a dig.  They are both just outside the "norms" of their time which made them even more interesting to me as a reader.  I really enjoyed my time spent with this book.