On Tour With Short Investigations by Clair M. Poulson + $25 and Book Giveaway! 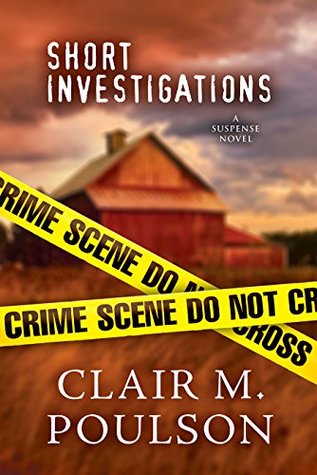 In the sleepy town of Heber, a strange 911 call is made to report an unthinkable crime: someone has murdered a woman . . . and her body has been found in Rhett Ketchum’s barn. Rhett, a well-known rodeo cowboy, is placed firmly at the top of the suspect list—the only problem is, he’s innocent. As officers search tirelessly for the evidence needed to lock him up, Rhett takes matters into his own hands.

Max and Patches Fisher are the father-daughter duo behind the unconventional PI firm Short Investigations, and they agree to undertake the task of proving Rhett’s innocence. Soon the list of suspects begins to grow, and Rhett feels a glimmer of hope—and an undeniable attraction to Patches. But when the officers on the case become targets themselves, it seems they may be the ones in need of protection. As events take a deadly turn, it’s up to Max and Patches to uncover the truth before time runs out.

I've been reading Clair Poulson books for a long time now so I know exactly what I'm going to get when I pick up one of his books.  I'm sure my reviews all sound about the same but that says something about his consistency.

One thing I know going into Clair Poulson books is that the characters aren't going to overwhelm me with personality.  I won't fall in love with them.  Any type of romantic starts to a relationship are going to be hard for me to feel.  These books are more plot driven than character driven.  But I always know this going in so it's all good.

This was a great murder mystery.  Actually, it started out with one mystery and ended with three!  There were so many things swirling around in this story which had me interested from beginning to end.  The list of suspects grew and I was right there, suspecting them all!  This is the consistent part I was talking about before.  Clair Poulson knows how to write up a good, interesting mystery.  I actually think this one might be one of my favorites.

Content:  some violence, death (described in some detail), peril.  LDS fiction so some things specific to that religion are made (not drinking, smoking) but nothing preachy.  Characters offer a prayer for help.

a Rafflecopter giveaway
Posted by Getting Your Read On at 9:22 AM