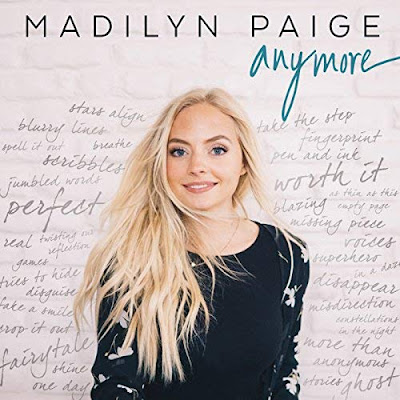 Madilyn Paige matures into a fresh new pop sound on her follow-up to her debut self-titled EP. Her pitch-perfect vocal talent combines with progressive electronic and traditional pop production on this album. Keeping with the inspirational tone of her first album, this new effort shows Madilyn striking out with bold messages about positivity, self-worth, inner strength, and the dangers of comparing ourselves to others in a hyper social-media world. Standout tracks like "Scribbles" examine a deeper relationship with God, and the anthemic "We Are the Riptide" is a call to girls across the world to unite as a force for good.

I am always excited to hear new songs by Madilyn Paige.  She has a voice that is recognizable and I love her sound.  One of the things I love about Madilyn is that she sings songs that deal with relevant feelings and issues of today in a positive and uplifting way.  Her first track, Perfect, is fantastic.  I love the message and the tune is so catchy.  By far my favorite song of the album.  I also loved the track featuring David Archuleta, another singer who always portrays positive and uplifting lyrics and songs.  The two of them together is a great combination.  This is definitely a feel good sort of album and I enjoyed it so much!

Below is the music video for "Perfect".  Enjoy!

Track List1. Perfect2. Anymore (feat. David Archuleta)3. Scribbles4. One Day At a Time5. We Are the Riptide6. Anonymous7. Shine

Madilyn Paige is a singer-songwriter who has performed for audiences throughout the United States, in Canada and Japan. At age 16, she was a Top-20 finalist on Season 6 of The Voice. Madilyn has opened for the Sawyer Brown Band, as well as the pre-show for Rachel Platten, American Authors and Jason Derulo. She has also performed with Nathan Pacheco, David Archuleta, and Vocal Point. In addition to performing, Madilyn speaks to youth groups about the importance of having self-esteem, which is the message of her single “Irreplaceable.” She was able to share her song, and part of her message on Face to Face, a live streaming event, that was viewed by youth around the world.
Posted by Getting Your Read On at 4:00 AM