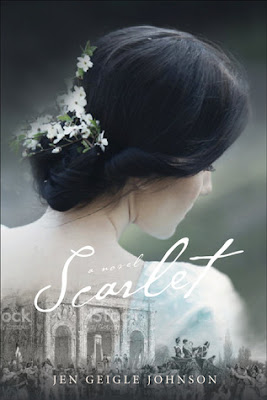 The roads in and out of Paris are heavily guarded, but the dead have easy passage out of the city. A ragged old woman transports the coffins of the most recent victims of the guillotine and is waved on unimpeded. Later, the same crone watches five French aristocrats step out of their coffins unscathed. Not beheaded but spirited away to safety by that most elusive of spies: the Pimpernel. Or, as she's known in polite society, Lady Scarlet Cavendish.

When not assuming her secret identity as a hero of the French Revolution, Scarlet presents herself as a fashionable, featherbrained young widow flitting about London. In truth, this façade is merely a diversion designed to conceal her clandestine work in France. Among members of the doomed French aristocracy, the Pimpernel is renowned for her bravery and cunning. But when tasked with rescuing handsome Comte Matteo Durand, she faces an unprecedented challenge: she is falling in love with the man. If ever there were a time to keep her head, it is now— because in a world brimming with intrigue, she is not the only one harboring secrets. And if Scarlet doesn't take care, Madame la Guillotine may finally catch up with the Pimpernel.

The French Revolution.  Such a horrible, awful, bloody time in French history.  It's honestly not my favorite time in history to read about but I thought this story was well balanced and didn't dwell in the beheading place too much or too long.  But still.  The moments it did were awful, and dark, and so, so sad.

The story builds continually- both in plot and with the characters.  By the time I got to the last third of the book, I was almost speed reading because I was so desperate to know how it would all work out!  I had to constantly tell myself to slow down.

Ooh boy, Matteo was swoony!  His silver tongue said the prettiest words to Scarlet.  I loved his devotion to her.  He was the happiest part of the story for me.

I really enjoyed my time in this book.  It definitely kept my attention and I was invested in all parts of it.

- I received a complimentary copy of this book from the publisher.  All opinions expressed are my own.

a Rafflecopter giveaway
Posted by Getting Your Read On at 8:35 AM