Take a Chance on Me: A MyHeartChannel Romance by Kaylee Baldwin 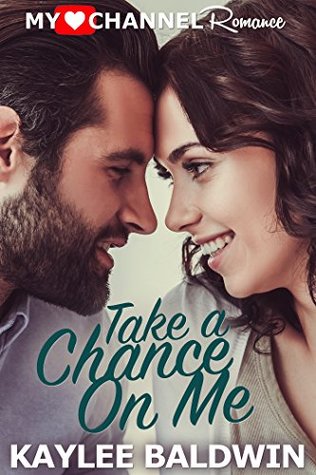 Madelyn Stewart knows how to have fun, no matter what her ex-husband claims, but between working two jobs and taking care of her five-year-old son, opportunities for fun are few and far between. So when she is given tickets to take her son to see a live taping of the MyHeartChannel show Take a Chance, they go, even though it means she’ll have to stay up all night to turn in her latest article on time. To her shock, the daredevil star, Chance Risk, is none other than Graham Sawyer, the quiet accounting major she’d dated in college—someone she’d cowardly broken up with by note and hoped to never see again. When she makes a major mistake on her article, she has to swallow her embarrassment and reach out to Chance for an exclusive or risk losing her job.

Chance Risk doesn’t talk to reporters. Not after the way he’s seen them destroy his brother’s marriage and career. But Take a Chance is starting to lose viewers, he’s desperate. Despite his better judgement, when Madelyn reaches out, he can’t resist the opening to figure out why she broke his heart eight years before. His only condition: she has to come to three filming locations with him and his crew to get a real sense of what the show is about.

Swept up in adventure, they start to feel the chemistry from college rekindling. But the reason Madelyn left eight years before still looms between them. If Chance can’t convince Madelyn to take a chance on love, she’ll walk away again. This time forever.

I love the idea behind this series of books, each written by a different author.  Each of the main characters has a social media channel where they specialize in something specific.  In this story, Chance does a travel, educational, daredevil channel.  He is an extrovert, full of charisma and charm.  And Madelyn?  She is his polar opposite in almost every way.  AND, she is the girl that ran away from him with only a note left behind and no explanation.

Chance is one forgiving, smitten guy.  After everything Madelyn did to him, and honestly continues to do to him, he just keeps coming back for more.  I'm not sure I understood what the draw was for Chance and what attracted him so much to Madelyn, but I guess the heart loves who the heart loves.  He definitely provided some swoony moments that had the butterflies swirling in my tummy!

The addition of Madelyn's little boy brought a much needed aspect to the story.  It helped give Madelyn some warmth and it helped me to connect with her as a mother because otherwise, I'm not sure I would have made that much needed emotional connection.

This is a sweet romance, just a bit of romantic fluff to fill your minutes.   I liked it!

- I received a complimentary copy of this book.  All opinions expressed are my own.
Posted by Getting Your Read On at 8:49 AM

Labels: A MyHeartChannel Romance, Clean Romance, Kaylee Baldwin, Take a Chance On Me