A Tangled Inheritance by Chalon Linton + $25 and Book Giveaway 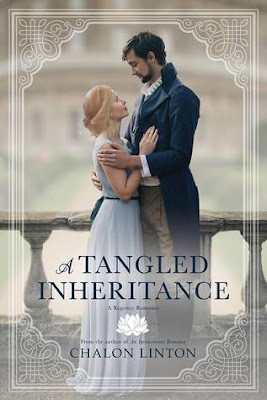 Nora Ellsworth, darling of London society, has her choice of eligible suitors, but since childhood, she has been expected to marry Jonathan Browning, a gentleman whose wealth and stability will someday secure the futures of Nora and her mother and sister. The family estate will pass to an odious male cousin upon the death of Nora’s father, and when he suddenly takes ill, her need to marry well becomes vitally important.

As Nora struggles with the idea of marrying without love, she finds herself increasingly drawn to Devlin Fausett, a man with dark eyes and intriguing conversation. But Devlin’s reputation as an indebted gambler is difficult to ignore. Despite the rumors from the ton and the marriage decision before her, Nora is determined to befriend the dashing Mr. Fausett, and his charms soon make it all but impossible to remember her duty. Until she learns the truth of her fortune. There is a way to keep her family’s estate, but the price is high: Nora must wed, as soon as possible. Torn between two very different men, she must make the ultimate decision. Will she be guided by her head or her heart?

I love this cover!  It feels so romantic to me.

This story had me completely engrossed.  I didn't want to put it down and I was so glad I had a few hours of quiet to read uninterrupted.  It doesn't always happen like that!

I loved the characters in this book and the return of some that starred in a previous book.  Devlin is flawed but good.  Characters that pull you in despite of their flaws, or maybe because of their flaws, are my favorite.  Devlin was fantastic and I so enjoyed his attraction to Nora and the way he continued to shift in his attitude until he was fully facing her and his growing love.  My romantic heart gives a sigh of contentment at his desire to protect her and do anything he could to see her safe and happy.

The story took some little twists that kept me interested and not completely able to predict everything exactly.  I mean, I thought I knew at the beginning what the ending would look like and I was right, but it was the getting there that took some unexpected turns.  I liked that a lot.

This was a great regency romance!  I would highly recommend it to anyone who loves this genre and even to those who aren't convinced they do!  :)