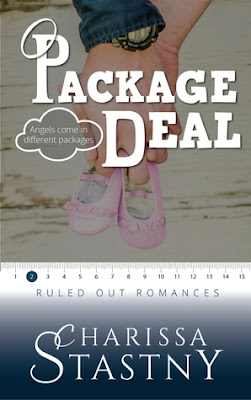 Angels come in different packages. Single mom Spring is doing her best to raise her two-year-old daughter alone. She has no desire to date again, so is pleasantly surprised at her best friend’s wedding when a handsome man’s flirtations charm, instead of annoy her. But when her toddler runs up and calls her Mommy, she can tell by his reaction that her daughter is a deal-breaker. He can’t escape fast enough.

Hudson Sandel is proud of his bachelor status even as he attends his little brother’s wedding as best man. Too bad the only woman who tempts him has a daughter that rules her out. Instant fatherhood isn’t on his agenda. But when the kid throws a tantrum, he swoops in to help keep her from ruining his brother’s wedding. When the night ends, he can’t stop thinking about the gorgeous blonde’s expression when he played hero to her child. It made him feel uncomfortably good, and it doesn’t help that he keeps running into the angelic duo around town. Hudson knows Spring and her daughter are a package deal. The question is: Does he want to take on that responsibility, or will he stick to the road leading to professional success and glory?

Hudson is a player and Spring?  Well, she is not.  Spring is firmly grounded in providing and caring for her daughter.  Hudson is living the bachelor life to the fullest while climbing up the career ladder as a lawyer.  They are at polar opposite places in life, with polar opposite ideas of what is important.  And yet, attraction.

As Hudson and Spring keep running into each other at various places, Hudson helps with the monster two year old.  He is some kind of two year old whisperer, I guess, but his toddler magic helps Spring and as a single mother, that is very attractive to her.

Hudson wasn't a character I liked every minute but it was extra satisfying to see his transformation as he began to regain perspective by helping Spring.  He eventually remembered what was really important, what he really wanted to do when he started out as a lawyer and how helping others can make you feel whole.

I enjoyed the interactions between Hudson and Spring.  They all occur in very normal and natural circumstances that we can all relate to.  There was a very natural progression to their encounters and each one helped the characters move forward in some way.  I'm so glad there was an epilogue which helped wrap everything up for me with a pretty bow.  Yes, I'm a pretty bow girl.  I was reading another series at the same time as this book and it left me hanging so the pretty bow wrap up was just what I was hankering for.

- I received a complimentary copy of this book through ebooks for review.  All opinions expressed are my own.

Posted by Getting Your Read On at 6:44 AM