A Bear's Bride: A Retelling of East of the Sun, West of the Moon (Entwined Tales #3) by Shari L. Tapscott 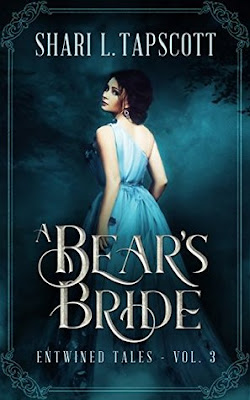 Don't judge a prince by his fur. After her father threatens to marry her to a dull farmer, free-spirited Sophie runs away from the only home she’s ever known and sets off into the world, seeking adventure and romance. But instead of excitement, she finds a forlorn castle and the solitary prince who lives there. For twenty years, Henri has been shrouded in mystery and speculation. He’s a legend, a nightmare, a blight upon his fair kingdom. Though Sophie knows it would be wiser to return home, she’s inexplicably drawn to the man of shadows. But it doesn’t take Sophie long to realize that falling for the cursed prince might prove to be more of an adventure than she ever bargained for… A Bear's Bride is a romantic fairy tale novella. It can be read on its own but is more fun when read as a part of the Entwined Tales, a series of interconnected fairy tales by six different authors. Each story follows the adventures of one of seven children from the same family as they seek out their own happily ever afters in spite of their reluctant fairy-godfather.

I love reading books by Shari Tapscott.  She's one of my favorites not only because she knows how to write great characters and fun adventure into her stories but because her books can be read and enjoyed by teenagers and adults alike.

This novella is is part of a collection of stories, each written by a different author.  I haven't read any of the other novellas but what a fun idea!  Each book is based on a character from the same family.

Fairy tale re-tellings are fun and this is a good one!  I read through it quickly and enjoyed it very much.

I really wish this was a full length novel.  I would have loved to have seen and felt more of the character's personalities and growing attraction over a longer period of time.  I felt like I had a pretty good handle on Sophie, but Henri?  I would have liked to have known him better.  Shari Tapscott has spoiled me with full length novels and I know how her stories go.  I just wanted more!  And that is a very good sign.  😊

Posted by Getting Your Read On at 9:29 AM