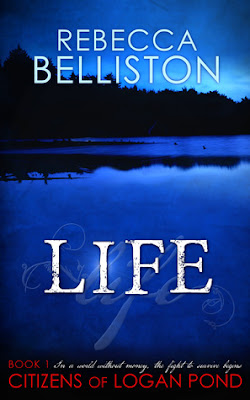 Her home. Her parents. Her freedom. Gone.
His dreams. His sister. Himself. Lost.
Two people.
One future.

The economy crashed, the country is floundering, and Carrie Ashworth struggles to keep her siblings alive. She has two jobs in her newly formed, newly outlawed clan: grow crops to feed thirty-six people, and maintain contact with Oliver Simmons, their local patrolman. Carrie's life is almost content when Greg Pierce shows up. A man with the ambition to help them survive. A man determined to hate her.

Greg sets to work devising systems to protect the clan from the new regime, but it doesn't take long to realize the true reason behind their safety. Patrolman Simmons has fallen for Carrie. When a government raid nearly wipes out their clan, Greg takes it upon himself to give the socially awkward patrolman what he wants. Only Carrie doesn't like Greg throwing her in Simmons' path, especially when Greg's brusque exterior melts, and she catches a glimpse of the real man underneath. Neither of them realize that Simmons' coworkers have grown suspicious. A clan the size of Logan Pond can't have 'slipped' past his patrols all this time. When their hidden loot goes missing, they want revenge, and the one thread holding Logan Pond together is about to break.

Carrie is forced to choose: follow her heart or save her clan. Life won't let her choose both.

I always love changing up the genre a bit and delving into a good dystopian.  The thing that makes dystopian books so attractive to me is the idea that any of these things could happen.  They could be a distant reality.  Especially this book with the economic crash and a floundering country left to survive in it's wake.  All too real.

The setting is great.  What used to be a normal suburb is now the hiding grounds for a group of people who have band together to survive.  They have so little yet they make it work.  There were a lot of characters in this book but I felt like I knew them all which is so important in a book like this.  I enjoyed the sense of community and the roles that each person played within the group.

I guess my problem was that I really didn't like Greg.  At all.  By the end of the book he is finally displaying a couple redemptive qualities, but it was too little, too late for me.  I just didn't like him.  I didn't like his mean ways or his in your face way of talking and acting.  I liked Carrie a lot better than Greg but even I got tired of her apologizing all the time for everything.  Kindness is one thing, doormat is another thing.

I'm giving this a solid three stars out of five.  I'm going to be reading the next book and I really hope I like Greg better.  Connecting with the characters is so key for me.  I just didn't feel that in this book, but I really did love the whole premise so I'm going back for more.  Look for my review of the second book next month!

- I received a copy of this book from the author.  A favorable review was not required and all opinions expressed are my own.

Posted by Getting Your Read On at 7:17 PM