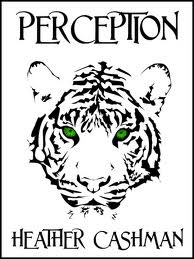 Synopsis:
Your perception will sharpen once you see through a tiger's eyes.
More than five hundred years after the apocalypse, the survivors of off-grid genetic experimentation have refined their mixed DNA to the point that humans and their animal counterparts share physical and mental links. Varying species have divided into districts, living in a tenuous peace under the President of Calem.

Ardana and her tiger ingenium Rijan leave their life of exile and abuse in the Outskirts, setting out with their twin brothers to redeem themselves and become citizens of the Center. But shedding their past isn't as easy as they had hoped. When the system that shunned them becomes embroiled in political conflict and treachery, their unique abilities and experiences from the Outskirts make them invaluable to every faction. The runaways become pawns to friends as well as enemies, and with every step it becomes more difficult to tell which is which. (from author website)

I will admit to being a tad bit confused in the beginning of this book.  I hadn’t read the blurb for the book beforehand so it took me a little while to figure out what was going on, but once I did, I was hooked.  Seriously.  Hooked.


I really enjoyed the connection between the siblings in this story and their tigers.  Their devotion to each other was touching and real.  I like how Ardana’s ingenium, Rijan, is a mixture of friend, mentor and defender all rolled into one.  Who wouldn’t want that?  I loved the binding ties of loyalty these animals and people had to each other.  One of my favorite quotes from the book comes from Rijan in one of those mentoring moments.  “You would be wise to remember how Maran’s injustice made you feel so that we are always good to one another and to others.”
Kliax is the stud of the show, no doubt.  He is all man, warrior hero.  All through the book I admired his patience and restraint.  Probably because he is everything I am not.  He didn’t really give in to impulsive behavior, but instead thought things through and waited for the right moments to act.  I enjoyed feeling the growing connection between Kliax and Ardana.  There was some fabulous kisses.
This is a fantastic adventure story!  This first book in The Tiger’s Eye Trilogy is full of fast paced action that just never lets up.  By the end of the book I was exhausted but I still wanted more!  (and this was a long book!)  It was unlike anything that I’ve read before but had some vibes like Hunger Games.  I’m really looking forward to the release of the next book at the end of 2011.
You can find out more about Heather and buy Perception here.
Posted by Getting Your Read On at 12:01 AM