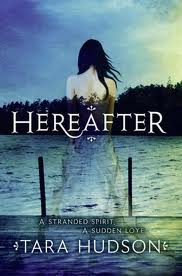 Amelia has been drifting in a world that fluctuates between nightmares and nothingness until she sees a boy in the river, drowning.  Suddenly, all she wants is to save him.  Her attempts prove fruitless because she is dead herself.  But then, in a sudden moment, she connects and the boy is saved.  Amelia and Joshua have an unusual bond between them.  Joshua can see and talk to Amelia.  Their bond grows as they try to solve the mysteries surrounding Amelia’s death while keeping their relationship a secret from the world that would view Joshua as crazy and his grandmother who is an exorcist.  But an evil spirit, Eli, is determined to make Amelia his own and take her to his ghost world forever.
Was this a ghost story?  I would say I’m not usually a fan of ghost stories, so I’m thinking this wasn’t really that ghost-ish.  I would call it paranormal with “beings” and more romance.  Maybe it was the romance that I liked the best…
No, it really wasn’t, although I did enjoy that part too.  What I really liked in this book was Amelia’s road to awareness and self discovery.  It had my curiosity levels high.  Amelia goes from this nothingness sort of existence, one nightmare to another, without any real concept of time or place to a gradual awareness of not only herself but others.  It’s like that head of hers starts ticking again and then connects with her heart and BAM, she realizes there is so much more to her existence.  It was a fun journey to begin with her.
Joshua is a good sort, isn’t he?  Very sweet and curious.  He sure takes the whole ghost and seer thing well.  I wasn’t over the moon about Joshua like I have been about some characters I’ve read, but I liked him.  I think there is more to this guy to be discovered though.
The book left me with so many questions unanswered.  I’m hoping for a sequel!  I really enjoyed this read.
There was frequent mild language, for those of you who are concerned with that.
Posted by Getting Your Read On at 9:19 AM