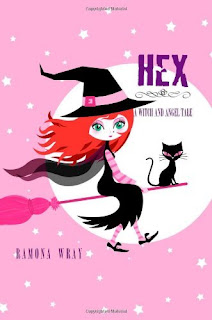 Like most girls at Rosemound High School, seventeen-year-old Lily Crane is acutely aware of Ryder Kingscott. Hands down the cutest guy in school, Ryder is cool, mysterious, and utterly untouchable…especially for Lily. For when she touches someone, Lily instantly learns all about their lives. And while such a skill might seem nifty, in truth it is wrecking Lily’s life.

So she is shocked when Ryder asks her out — and even more shocked to discover he has a rival. Lucian Bell is the gorgeous new kid who can’t take his eyes off of Lily. Being pursued by two hotties should make a girl happy, but Lily is skeptical. The boys act as if they’ve met before, hating each other with a passion that could only be rooted in a dark, dangerous past. A past full of terrible secrets. The kind of secrets that could get a girl killed.  (from Goodreads)
From the cover, (yes, judging the book by it's cover here) I would have pegged this book to be a bit different.  The cover suggests a lighter, chick lit story to me.  Something along the lines of Bewitched or something.  (yikes, did that just date me?!  I watched the re-runs.  Really.)  I'm a girl that doesn't really read the blurbs on the back or inside cover of books.  Why?  I just like to be surprised, I guess.  I want the book to tell me the story without reading a synopsis first.  When I read reviews on blogs, I rarely read the synopsis.  I just want to know if people like it mostly and why.
Anyway, I was expecting something different than I got with this book.  Not in a bad way either.  I think my favorite part of this book was all the sarcastic one liners and the funny mental pictures I was constantly given.  It seriously made me snicker. A lot.  "I swiveled with the grace of a partly paralyzed sumo wrestler and proceeded to my seat."  See what I mean?  Can you just picture that?  (snicker, giggle)  One of my favorite parts of the book was when Lily is talking about eating her breakfast and comparing it to a whale.  I laughed out loud.
The rest of the book?  I liked it.  It was a good, quick read.  It had magic, romance and danger lurking around every corner...AAAHH!  Lily is a likable character and Ryder?  Um, hello.  He is a yummy sounding boy, right?  The only thing is I didn't feel like his bad boy persona carried through the book though.  It was like he was all mysterious and bad boyish at the beginning and then when Lily gets to know him he really isn't that at all.  Not even a little bit.  I kinda wished there was more of that character carried through the whole book with Ryder.  But I guess Lucian more than makes up for that though.
The ending was very satisfying for me.   :)
There was mild swearing throughout the book.  No sex, although it was close.  (ah-hem)
Posted by Getting Your Read On at 4:14 PM