The Opera Sisters by Marianne Monson 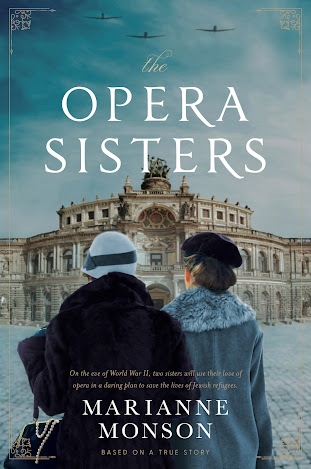 Based on the true story of the Cook sisters, who smuggled valuables out of 1930s Nazi Germany to finance a daring, secret operation to help Jews find hope for a new life in England British sisters Ida and Louise Cook enjoy their quiet, unassuming lives in south London. Ida writes romance novels, and Louise works as a secretary. In the evenings, the sisters indulge in their shared love for opera, saving their money to buy records and attend performances throughout England and Europe, becoming well-known by both performers and fellow opera lovers.

But when Hitler seizes power in 1933, he begins targeting and persecuting German Jews, passing laws that restrict their rights and their lives. The sisters continue their trips to the German opera houses, but soon, Jewish members of the opera community covertly approach the sisters, worried that they will be stripped of their wealth and forced to leave their homes and the country. Danger looms on the horizon, threatening to spill across all of Europe’s borders.

Ida and Louise vow to help, but how can two ordinary working-class women with limited means make a difference?

Together with their beloved opera community, the sisters devise a plan to personally escort Jewish refugees from Germany to England. The success of the plan hinges on Ida and Louise’s ability to smuggle contraband jewelry and furs beneath the watchful eyes of the SS soldiers guarding various checkpoints. But how many trips can they make before someone blows a whistle? Or before the final curtain falls on Germany’s borders?

The Opera Sisters is a riveting and inspiring novel of two unlikely heroines whose courage and compassion gave hope to many Jews desperate to escape Nazi persecution.

I absolutely love historical fiction and when it is based on real people?  Even better.  I was so excited to read about these two sisters, Ida and Louise Cook, who bravely changed and saved people's lives during WWII.

It was fascinating to read about Ida and Louise's path that led them to helping so many people from Germany.  The opera and a love for music started it all.  A love for humankind and kind hearts led to the rest.  Ida sacrificed so much and honestly, it was very touching.  Stories like this remind me of the good people in the world.

The harder part for me was how the story was told.  There were SO many people, it was sometimes hard to keep track of them all.  Because of this, I had a harder time connecting emotionally.  Of course I cared about what was happening and the people spoken of, but it was more in a general type of way and not an individual connection.  The way the story jumped from the sister's story to other stories took some getting used to.  I didn't really love the format.

I feel like I learned something and of course I was reminded of the atrocities of war and most specifically, the atrocities against the Jewish people.  Heartbreaking.  But so important to remember.  What a great tribute this book is to these to these people.

Content:  peril and wartime violence.  Nothing in great detail.