Rise of the Phoenix King (Crown and Crest #4) by Shari L. Tapscott and Jake Andrews 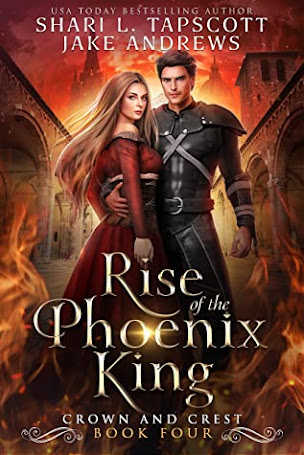 The epic conclusion to the Crown and Crest series!

After serving Camellia for the last five months, Henrik is prepared to sacrifice his future to remove the people he loves from the princess’s clutches—even if it means he must say goodbye to Clover for good.

But Camellia isn’t willing to turn away from her wicked ways. Just when it seems peace might be possible, she rises again, more powerful than anyone could have predicted. Armed with magic to control a legion, the princess is determined to overthrow Lawrence and take the crown by force.

For the first time in Caldenbauer’s history, humans, Woodmores, and High Vales must band together to defeat a foe who grows stronger with each passing day. Alliances must be formed, but it’s difficult to forgive the wrongs of the past.

A new era is on the horizon, but darkness looms before the dawn…

The last book!!  Should I shout for joy or cry?!  Both.  The answer is both.  I always love when epic stories, spanning multiple books, come to an end.  My heart always longs for knowing endings and wrapping things up.  BUT.  It's also hard to reach the end of such a fun fantasy adventure.  The characters have become friends and it's hard to say goodbye to that.

This story is fast moving and full of crazy stuff.  You would expect that from a conclusion, right?  Everything is coming to an explosive ending!!  Each book has been working it's way to this.  Camellia the insane.  War.  Unlikely alliances.

Henrik and Clover.  Will they?  Won't they?  Yes?  No?  It's the constant questions throughout the whole entire series.  Their story is basically a roller coaster of ups and downs, separately and together.  My desperate heart was so glad to reach a resolution with them.

This book will tug at your emotions.  This band of friends is among my favorite group of characters because of their quirks and their diversity.  I will miss them.