A Pumpkin and a Patch by Jennifer Peel 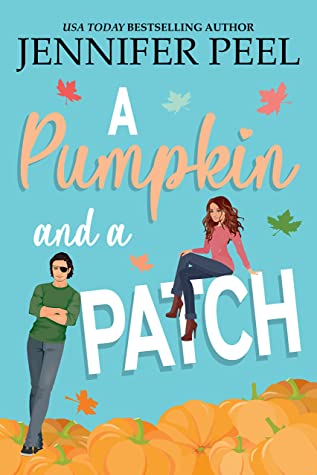 Every person has that one thing they’re known for, and it doesn’t matter what you do, that one thing—whether good or bad—follows you around like a bloodhound for the rest of your life. For me it’s a story I wrote when I was fifteen. Forever more I will be known as the Reece the Rogue Pirate girl, instead of Josie Peterson. Why couldn’t I be known for all the cute children’s stories I’ve written about my family’s pumpkin patch?

Tragically, the torrid story I wrote as a teen was based on a real person, Reece Cavanaugh. And guess what? He grew up to be a pirate—okay, lawyer. Same thing. To make matters worse, the man is representing my ex-fiancé who wants to steal my treasure, aka engagement ring. If that wasn’t the icing on the cake, Reece has an adorable daughter who happens to be my new student. That’s right, I must now have actual conversations with him after avoiding him for half my life, even by hiding behind banana displays when needed. But the more I get to know Reece—the real version, not the imaginary one who ravishes me on sandy beaches—I can’t help but wish we could roll around in the sand together. There’s a problem though, the school I work for frowns upon relationships between parents and teachers. And it’s pumpkin season, which means all my free time is spent on the family farm. But when he kisses me, I can’t help wanting to break all the rules and get tangled up in the barn. The burning question is, am I brave enough to make my story a reality or will it be another bad ending?

Move over pumpkin spice, there's a new flavor in town and his name is Reece Cavanaugh. Get a fan ladies because he's coming in hot and determined. And HOT. 🔥

Josie is one lucky girl. Here's my one line to her: Resistance is futile.
Seriously, she tries to run and avoid at first. Then she tries to hide. Then she is angry. Then she is in denial. Then she sets boundaries that shrink with every encounter. Like I said, resistance is futile. That's because Reece is really that charming, that attentive, that considerate, that determined and that hot. He doesn't try to hide the fact that he is one hundred percent into Josi. He's full on and I absolutely LOVED him.

If you are looking for some romantic entertainment, this is your book. The tension and build up is great, the kissing is fantastic. You will fall in love with Josie, Reece and the pumpkin farm. It's a feel good kind of book that will have you smiling the whole way through. And then later too, when you think back on it.
This book is on KU if you have that!

Content: kissing. Mild innuendo.
Posted by Getting Your Read On at 7:52 AM

Labels: A Pumpkin and a Patch, Clean Romance, Jennifer Peel