The Duke Meets His Match by Karen Tuft + Win This Book! 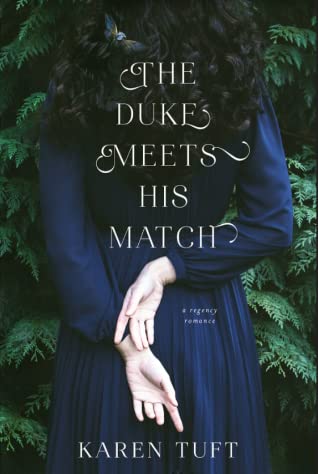 At thirty years of age, Susan Jennings has long been considered a spinster. Exceptionally intelligent, she has little tolerance for London and the dreaded Season—if that’s how one is expected to find love, it’s not for her. But when an invitation arrives that cannot be ignored, Susan leaves her comfortable life in the country and enters the fashion and frivolity she most despises. She quickly discovers, however, that there is more to loathe in London—and his name is George Kendall.

George, Duke of Aylesham, has learned to keep his distance from cloying females chasing the title of duchess. Susan Jennings, however, proves an entirely different challenge—a woman who has pushed him to the limit of his patience with their every encounter. But their simmering hostility is disrupted by a thoughtless slip-up: to avoid a marriage of political strategy, George claims he is already betrothed. And when pressed for the name of the lucky woman, only one name comes to mind: Susan’s. Their forced betrothal proves advantageous, but when their verbal sparring must change in order to be convincing, the line between fact and fiction becomes blurred by something neither expected: love.

People don't always make the best first impressions and this is especially true for Susan and George.  They have an awful first meeting and their second isn't much better.  It was really fun to watch these two shift their opinions as they got to know each other better.  The shifting relationship between George and Susan felt natural and believable.  They had to work through misunderstandings and they had to learn how to communicate.  I loved when they presented a united front.

I also loved when Susan got her Cinderella moment- a new wardrobe, haircut and styling along with some words that built her up.  It was one of my favorite moments in the book.

This was a fun book.  I really enjoyed it and ended it feeling satisfied and happy.