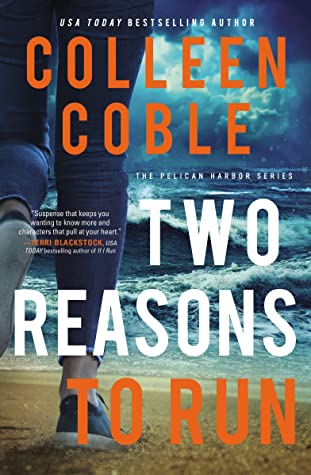 A lie changed her world.Police Chief Jane Hardy is still reeling from the scandal that rocked her small-town department just as she took over for her retired father—the man who wrecked her life with one little lie. Now she’s finally been reunited with her presumed-dead fifteen-year-old son, Will, and his father, documentarian Reid Bechtol. A crisis looms. When a murder aboard the oil platform Zeus exposes an environmental terrorist’s plot to flood Mobile Bay with crude oil, Jane and Reid must put their feelings for each other behind them and work together to prevent the rig from being sabotaged. A killer targets her son. Then the terrorist puts her son Will’s life on the line. Protecting him could be the common ground they need . . . but then ghosts from the past threaten to ruin Jane and Reid for good. She’s got plenty of reasons to run. But what if she stays?
* Amazon * Goodreads *
First I want to say that this book is the second in a series that should be read in order.  This book picks up where the last one left off and I think it would be hard to connect to the characters and understand the full story line if you don't read the first book.
I was in the mood for something fast paced and full of suspense and mystery and this book definitely delivered that.  It was a good change from the other genres I've been reading as of late.  Jane, Reid and Will are becoming very familiar to me.  I am invested in their stories and how their family will re-shape and how it will all end for them.  There are several loose ends individually and collectively for these characters that will continue into the next book.
The relationship between Jane and Reid is very slow moving and not terribly romantic so I wouldn't really label this as a romantic suspense but that isn't to say I don't like it, because I do.  I thought the story was interesting and like I said, the forward momentum was great.  I loved the constant danger that kept me engaged.  I'll be looking forward to the next book!
Content:  peril, violence, kissing
- I received a complimentary copy of this book.  All opinions expressed are my own.
Posted by Getting Your Read On at 4:00 AM