Falling Down Under (Opera Dynasty Romance Book 2) by Lisa Swinton 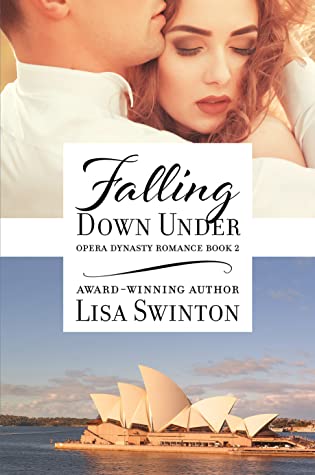 Her wedding will save her family from ruin. But opera's Aussie bad boy won't let the ring on her finger stop him. Will she choose her family or her heart?

Giada's sick of hearing Jack Wellington's name before she even lands in Australia for her next opera. And her mother doesn’t need to be there to ensure Giada doesn't fall prey to his charms. She's a grown woman who can take care of herself, and she's well aware that a scandal could prevent her wedding to one of Italy's most eligible bachelors. Not to mention, his wealth will save her family. If only Giada could shake the lingering doubt that she doesn't know what love is.

Jack's used to getting the woman he wants. For this opera, he has his sights set on Giada. The ring on her finger only adds to the challenge. When his usual tactics fail, he's forced to face his inner demons to become a man worthy of her. But such a man wouldn't entice her into his arms to break her engagement.

When the opera ends, Giada must decide between a marriage that will save her family or risk it all on a man trying to steal her heart.
* Amazon * Goodreads *
Shall we take a trip down under?  Australia, here we come.  A land I'd love to visit one day, but for now books will have to take me there.
Wow, this book was kind of like a soap opera.  It had lots of drama and vibrant characters.  Jack the playboy, who uses women and throws them aside.  He's a love 'em and leave 'em kind of guy in need of a personality overhaul.  He decides after meeting Giada that he's after a better life and redemption.  Giada is under the thumb of her overbearing, controlling, manipulative, mean and arrogant mother.  She doesn't have much say in her life and she is almost 30!  What?!  I know.  It's nuts.  Then add in extended family with their own drama and yup, it feels a bit like a daytime soap.  The mother, though.  She is a nightmare.  She's the character you will love to hate.
In the beginning of the book, I really doubted that Jack could transform enough to make me like him.  I did end up liking him (not loving), even though I wouldn't have trusted him like Giada did.  It would have taken longer for me.  Jack did take many admirable steps and made restitution where he could.  He faced his demons with help and it felt redeeming to me.
I feel like I have to give Giada's fiance some props though.  I actually liked him better than most of the characters in this book, even with his limited page time.  Even better than Jack.  😳  That might be bad to say.  I felt like he deserved better from Giada in the end.
Overall, this was a very diverting read.  I was definitely interested in what was happening and how things would all play out.
This is book two in the series but can easily stand alone.
Content:  some innuendo, kissing.
This book is on Kindle Unlimited which is where I read it.
Posted by Getting Your Read On at 11:13 AM