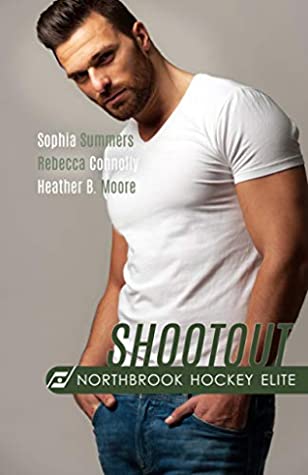 Trane wondered if he would ever be the kind of guy who settled down and had a family. He had too much in his past, too much to deal with in his present to have hope that his future would be anything other than many years as one of the best goalies in the NHL. Until he meets the new ice girl.

Former dancer on Broadway, Janae, can't seem to get a job anywhere but as an ice girl for the Detroit Comets. Her plan? To make her mark in Detroit so she can get back to Broadway as soon as possible. Things are going well. Her new dance routines for the team become an industry sensation. She predicts she'll be back in New York within the year. But then she goes out with Trane Jones. And suddenly everything she thought was important might not be.

How can this be the last book in this series?!  I don't think I'm ready for this to end.  I have loved the feeling of family and camaraderie I've felt throughout the whole series.  Each book focuses on one particular hockey player but the whole group appears somehow in each book.  It's like keeping old friends while making new ones.

These books are easy reading, romantic distractions.  I know what I'm going to get going in and that just feels good.

Trane is such a good guy.  I love how hard he works at being that stand up guy at all times.  He is a defender of the underdog because he was the underdog and he knows how it feels to have someone in his corner, making a difference for him.  I loved how Trane's story came full circle in this book.

My only complaint about this book would be Janae and her backstory.  I feel like we got mentions of it but nothing fleshed out.  I don't know where she came from or what happened in her family.  Only brief comments here or there.  I wish I understood her more.

The Northbrook Hockey series has been a fun ride and I'm sad to be at the end.  I'll miss this family of Hockey players.