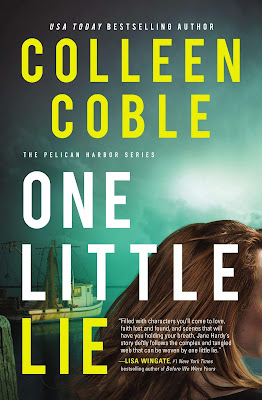 It started with one little lie. But Jane Hardy will do everything in her power to uncover the truth in this gripping new romantic suspense.

Jane Hardy is appointed interim sheriff in Pelican Harbor, Alabama, after her father retires, but there's no time for an adjustment period. When her father is arrested for theft and then implicated in a recent murder, Jane quickly realizes she's facing someone out to destroy the only family she has.

After escaping with her father from a cult fifteen years ago, Jane has searched relentlessly for her mother—who refused to leave—ever since. Could someone from that horrible past have found them?

Reid Bechtol is well-known for his documentaries, and his latest project involves covering Jane's career. Jane has little interest in the attention, but the committee who appointed her loves the idea of the publicity.

Jane finds herself depending on Reid's calm manner as he follows her around filming, and they begin working together to clear her father. But Reid has his own secrets from the past, and the gulf between them may be impossible to cross—especially once her father’s lie catches up with him.

Wow, there was a lot going on in this book!  I loved the first chapter of the book which really set the stage for the rest of the story.  It gave me an instant connection to emotion and really peaked my interest.

From the beginning there is a steady build of information and mystery.  There are a LOT of characters in this book and because of that, this book is more plot driven than character driven.  I liked the main characters but I didn't really connect with them emotionally aside from the very beginning.  I wouldn't call this a romantic suspense because the romance was barely there at all.  It was more a mystery/suspense with a toss of awareness/attraction that is mostly not acted upon.  This story ends with some mystery resolution, but left most other things hanging.  I guess the story continues in the next book which will be great, but I was left feeling a bit let down.

The mystery though was on point.  I was suspecting many people and trying to work it all out in my head but yeah, I didn't get it right.  The intensity ramps up slowly but I could feel it happening.  It's exactly what you want to feel when reading this type of book.

One winner will receive a print copy of Strands of Truth by Colleen Coble (US only)
Ends March 25, 2020

On Tour with Prism Book Tours
Posted by Getting Your Read On at 9:33 AM