Deadly by Design by Paige Edwards 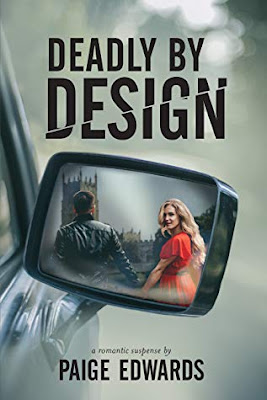 For up-and-coming Formula One engineer, Jack Pressley-Coombes, there is nothing better than the smell of rubber and the roar of a racecar engine. When he witnesses a crash at the first international grand prix of the season, Jack makes a shocking discovery. His design is on a competitor’s car.

To keep Davis Racing LTD, his British Formula One employer from closing its doors, Jack goes undercover for MI6 to ferret out the company saboteur. When the investigation interferes with his and Gillian Buchanan’s blossoming romance, Jack can’t extricate himself from the web of deceit. But he’s not the only one with something to hide. Gillian too carries secrets. With time running out for Davis Racing, the evil which walks its corporate halls turns in Jack’s direction and threatens all that he holds dear.

There was a lot to like about this book.  The story grows steadily (although sometimes a bit slowly) and I could feel the tension and danger mounting.  I happen to like the fact that I knew the "bad guy" from early on.  It made each moment paths crossed even more nail biting. The last third of the book was my favorite as the story reached it's climax and all things came crashing together.

I really liked Gillian with her struggles and past.  I loved her determination and her spunk.  She was an easy character to root for.

Jack?  I could take him or leave him, either way.  He lacked in the personality department a bit.  His integrity is probably his most redeeming quality and that is definitely something I value in someone.  I didn't really feel that spark of chemistry thrumming between the characters because, well, Jack.  He's not really a butterflies in the tummy kind of guy, I guess.  But, Thierry made up for lots of things in the personality department.  She was a great addition to this story.