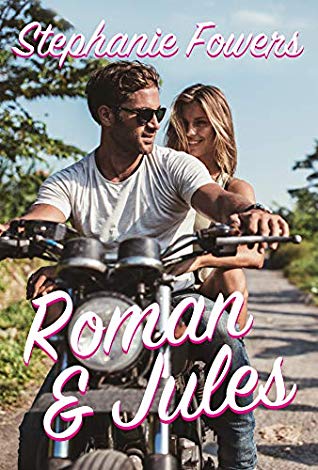 When Jules meets Roman Verona at an exclusive Vegas party, she doesn’t suspect the bad blood that runs so deep between Roman and her boyfriend, Ty, until the two men have it out in front of her. Even worse, Jules finds out that Ty has never loved her. She storms away, only to have her ex’s sworn enemy offer her a ride into town... as well as a shocking proposal.

A nice girl wouldn’t even consider making her ex jealous with a sham marriage, so why does she chance it with Roman?

Acting the role of devoted husband, Roman soon becomes fascinated with more than Jules’s sweet smile and poetic soul. As her band’s fame grows in Vegas so do his feelings for her and what started out as revenge against his miserable cousin turns into something deeper.

But bad boys don’t settle down. So why does Roman risk everything to win Jules’ heart?

All bets are off in this modern and sleek tale of star-crossed love!

I lovey loved this one!  😍  The story, the cover, everything!  It's my favorite from this author, I think.

I just love a good fake marriage story and this one felt new and fresh.  There is an air of rebelliousness, revenge and recklessness as the story begins for both Roman and Jules.  It was the perfect way to lure me in!  I loved the chemistry between Roman and Jules and how it grew into friendship and respect and admiration.  When you combine chemistry with those other attributes, love is sure to follow.  Those are my favorite kind of love stories.

Roman does so many sweet things without Jules even knowing.  I love how hard he tries to please her and speak her language.  Jules is just sweet- from beginning to end.  And speaking of the end . . .  I loved it.  💙

Content:  mild violence, kissing, mild innuendo
Posted by Getting Your Read On at 9:49 AM