On Wings of Devotion (Codebreakers #2) by Roseanna M. White 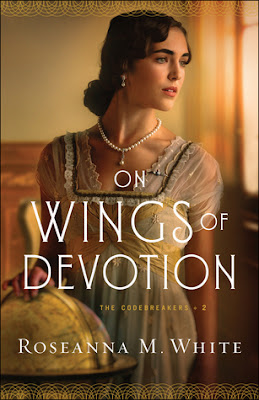 All of England thinks Phillip Camden a monster--a man who deliberately caused the deaths of his squadron. But as nurse Arabelle Denler watches the so-dubbed "Black Heart" every day, she sees something far different: a hurting man desperate for mercy. And when their paths twist together and he declares himself her new protector, she realizes she has her own role to play in his healing.

Phillip Camden would have preferred to die that day with his squadron rather than be recruited to the Admiralty's codebreaking division. The threats he receives daily are no great surprise and, in his opinion, well deserved. What comes as a shock is the reborn desire to truly live that Arabelle inspires in him.

But when an old acquaintance shows up and seems set on using him in a plot that has the codebreakers of Room 40 in a frenzy, new affections are put to the test.

I'm so excited to have discovered a new author whose books I love!  Roseanna M. White!  She writes historical fiction which is one of my favorite genres.  This particular series is set during WWII and it really is amazing.  The whole story just came alive in my head.  I could picture the characters, the places and all the things going on.  On Wings of Devotion is the second book in the series.  I was lucky enough to pick up book one (The Number of Love) on a deal from Amazon (It's still on sale for just $.79 so grab it NOW! If you don't follow me on Facebook, you should!  That's where I post about all the freebies and deals I find!) and I read it right before reading this book.  It was awesome to jump right from one book to another and never leave that world of characters.

We first meet Phillip Camden in book one.  He is aggressive and angry with the weight of the world on his shoulders.  I'm so glad this second book was all about him and the golden hearted Arabelle.  I loved how the story grew steadily and how my emotions were invested.  By the end I felt almost desperate, reading much faster than I should have been!

This whole Codebreakers idea is fascinating to me.  What an important part of history that I had no idea about before now.  The author does a great job of outlining fact and fiction in her afterwords so I recommend reading those.

If you love historical fiction, I would really recommend this series.  I will be anxiously awaiting the next book!!

Posted by Getting Your Read On at 2:33 PM