Just a Boyfriend (End of the Line #2) by Sariah Wilson 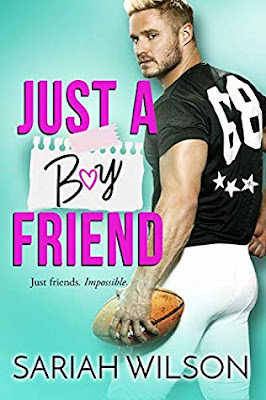 Ian “Bash” Sebastian and Ember Carlson were high school sweethearts…until their single parents got married. With one thorny twist of fate, a secret young crush went from on fire to off-limits. What could a new stepbrother do but bail? Now, after almost four years, Bash has returned to Seattle, and he’s back in Ember’s orbit at End of the Line. EOL is the go-to college for second-chance scholarships. But what about love?

Sure, the old hurts are there. So is the attraction—and it’s more magnetic than ever. Still, they’re adults now, levelheaded and just fine with the friend thing. If only to make family dinners less awkward. But when they agree to start dating other people, moving on threatens to bring them closer together than ever.

Is it time to admit their past to their parents? Even trickier, their hope for the future? Because Ember and Bash deserve a love story of their own. With all their defenses down, can they make it a happy ever after?

It's always a happy day with a happy dance when I get to read a new Sariah Wilson book!  And that's what this book made me- happy, happy, happy.  It was flirty and fun but not without it's more serious issues.  The characters do struggle a bit with outside issues and they also struggle between themselves but it never became greater or more oppressive  than the love and attractions swirling around them from the very beginning.  Have I ever mentioned how much I love swirling love and attractions?  Yum.  Sariah Wilson does this sort of thing very well.

I first met Bash in the previous book in this series.  I knew he was going to be a fun character to delve into.  Ember and Bash have a very interesting relationship and history.  It makes for some equally awkward and heart warming situations.  I really enjoyed reading this one- it was just what I needed.  I smiled and I swooned.  See?  Happy.

This is the second book in this series but can stand alone.  You might be happier if you read the first book (The Friend Zone) though.  The characters from that book do appear in this book.