The Shipbulider's Wife by Jennifer Moore + $25 and Book Giveaway! 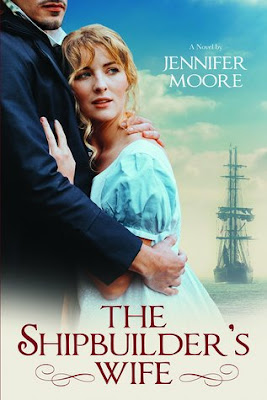 The day of her parents' garden party dawns bright as Lydia Prescott eagerly anticipates a marriage proposal from a handsome and wealthy plantation owner. The lovely debutante plans to steal a moment away with her beau, but her plans go terribly awry. Instead of her intended, she is joined by a stranger the largest man she's ever laid eyes on. And it is clear Jacob Steele is there for reasons far more sober than the party. With British raids erupting all around them, it is his job to reassure plantation owners of their safety. In reality, however, Jacob is an espionage agent, and the truth is dire: America is on the verge of invasion by the British.

Blissfully unaware of the danger surrounding her, Lydia basks in the glow of her recent engagement. But her joy is short-lived—a surprise British attack results in a devastating wound, and her plans for the future are shattered. Lost in her devastation, Lydia could never dream that Jacob, that giant of a man she met so briefly, would prove to be her saving grace. And with a war raging around them, she may be called upon to save him too.

There is just something about historical fiction books that sing to my heart.  I really love a well done historical fiction.  This one was perfect for me because it was set during a pivotal time in US history.  The British are invading, raids are happening, people are dying.  Both Lydia and Jacob are caught in the middle.  There was a good balance of plot and character building.

I felt like I knew both Lydia and Jacob and I felt their growth throughout the book.  Their relationship progression felt believable and genuine which is so important to me as a reader.  I loved Lydia's spunk and determination and I also loved her vulnerable moments.  I could actually say the exact same thing about Jacob.  He is rock steady in his determination to America's cause but when it comes to matters of the heart, he is so unsure.  It made him so endearing!

Like I said before, this book really hit my sweet spot and I enjoyed it so much.  This is one of my favorite times in history to read about!

a Rafflecopter giveaway
Posted by Getting Your Read On at 7:07 AM