Bite Me (The Puritan Coven #1) by Louise Cypress 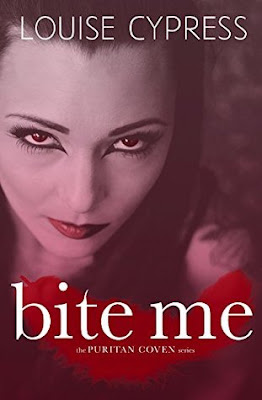 Morgan Taylor-Jackson can't wait for high school to end. In six months she leaves for UCLA and says goodbye to La Jolla, California and her parents' messy divorce. But when Morgan is bitten by a four-year-old boy, she becomes infected with a mysterious condition. Fever, insomnia, and a new bustline are only the beginning; Morgan morphs from nerd to bombshell.

As far as Van Xander is concerned, all vampires are evil, even the ones who reject human sacrifice and call themselves Puritans. When Helsing Incorporated sends Van to La Jolla to investigate the local coven, Morgan is his prime target. Pretending to be interested in her, Van asks Morgan out and puts her through a series of tests to determine her killer nature.

Morgan is thrilled to be dating a hot guy like Van and falls for him hard. As Van strings Morgan along, he grows increasingly guilty. Morgan is kind, compassionate, and a gooey romantic. Just as Van's mind begins to change, evil forces threaten everything. When prom night arrives, there are only two ways out of the ballroom: death or immortality.

Sometimes I just get in the mood for a paranormal romance.  I've been reading less of this genre lately and I miss it.

This is a young adult book, with the characters being in high school so naturally they feel and act young.  I don't know that I really felt connected emotionally to the characters, but I did enjoy the story.  I really liked Morgan.  She is a kind person and that always resonates with me.

The whole vampire romp can get to feeling very cliche because how many different ways can you really do vampire, right?  I thought the author did a good job of giving me some slightly varied ideas and scenarios so this felt like it's own story and set it apart from others.  I liked that for most of the story Morgan really had no idea what she had become.

Overall I liked the story.  There are two more books in this series as of right now and I've got them on my list to read when that paranormal urge strikes me.  They are all on Kindle Unlimited so that is good news for me!

Content:  kissing (I can't actually remember exact content details, sorry!  It's been a few weeks since I read it.  oopsy)