Yours, Dorothy by E.B. Wheeler 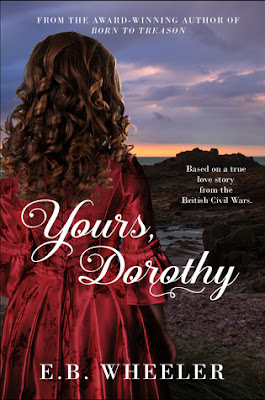 Based on a true love story from the British Civil War.

Dorothy Osborne's family has sacrificed everything for King Charles of England, living in exile in France after the king's defeat by Parliament. Dorothy knows it is her duty to marry well and help her family, which means finding a wealthy suitor: Royalist, or maybe French, but never a Parliamentarian, and not someone of her own choosing.

William Temple struggles to commit to his father's Parliamentarian cause, making his family wonder if he'll ever commit to anything. William wonders too, until he meets Dorothy Osborne. The connection between them is instant, but their families will go to any length to keep them apart. Can their love survive separation and the upheavals of the British Civil War?

I love historical fiction- especially when it helps me learn about something I don't know much about.  I really know nothing about the British Civil War but this book sure brought to light so many of the struggles from that time.  Books like this help me pause for a moment in my busy and comfortable life and think about the struggles of others gone before and how those struggles have shaped the world I know today.  It reminds me to be grateful for what I have here and now.

I thought the author did a good job with the history and helping me to see how the government and people were divided and how that affected the people there during that time.  I appreciated her chapter notes and the obvious dedication she had to research.

For me, this book was so slow and it was hard to stick with it at times.  I didn't really connect to the characters emotionally but instead felt like a casual observer from the outside looking in.  The last third of the book started to pick up and I enjoyed it much more than the rest of the book.  I admired Williams loyalty to Dorothy and how constant his heart was.  He said so many pretty words to her.  I loved those.  My romantic heart sighs when two people fight against all odds to be together for love.  In the end, that's exactly what my heart did.  I love that this is based on a true love story.  It makes it all the more real and sweet.

Content:  peril, war time actions were mentioned but nothing in detail.  Mild romance, some kissing