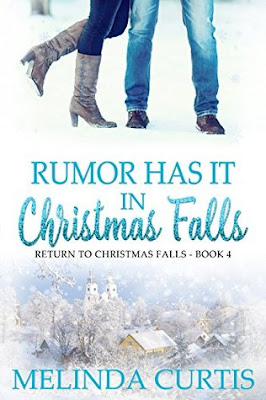 Twelve unlucky years ago, rumors flew about Lexi and Kevin. And now? Well, not much has changed, except this time neither can run away. Not from Christmas Falls. And maybe . . . not from each other.

As a political strategist at Dunlop Bennet & Associates, Lexi Townsend's career is going nowhere. She's a cubical dweller writing speeches for freshmen senators in DC. But if she can hitch her career wagon to a rising political star, she’ll be on her way to a corner office in no time. When she’s offered a plum holiday assignment–an ideal candidate with deep pockets, someone who could make the leap from local to national politics–she starts to dream about that corner office.

Until she realizes her candidate is Kevin O’Malley, aka Kevin the Hottie, Kevin the Snob, Kevin the Liar, the same guy who shattered her high school reputation back home in Christmas Falls with a rumor. Assignment in hand, Lexi braces herself for the most difficult political race of her career--because this time it’s personal.

This is such a fun series.  I love the whole concept with different authors writing about different characters that have some cross over into the other books.  This series has a real coming home feeling about it which I love.

Small towns and rumors.  Ugh.  I know how that is.  I've pretty much lived in small towns my whole life and it's true that rumors travel fast.  Once people have their mind set about those rumors, it's hard to shake.  But, as displayed in this book, small towns also know how to rally and take care of each other.  Christmas Falls is a perfect representation of small towns and I love how the authors in this series bring out a little of the worst but so much of the best.

I will say that I liked this book okay but I didn't love it as much as the others I've read.  I had a hard time connecting to the characters.  Even understanding Kevin's motivation for letting rumors fly, I didn't like it.  I felt like there could have been a better way to take care of the issue without hurting someone he supposedly cared about so much.  I don't know.  It just wasn't my favorite set up for a book.  But, all's well that ends well, right?  I love a happy ending.

- I received a copy of this book from the author.  All opinions expressed are my own.

Posted by Getting Your Read On at 8:35 AM