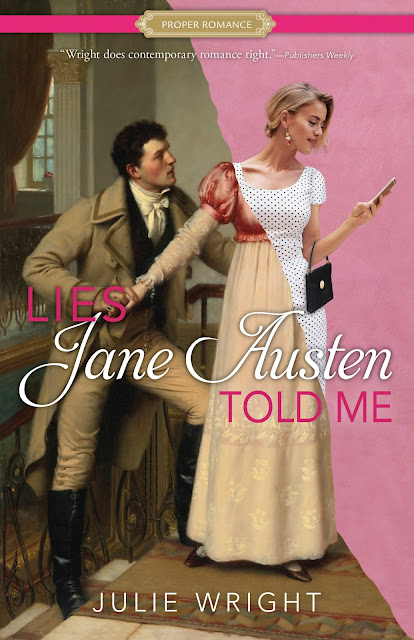 Ever since Emma read Pride and Prejudice, she's been in love with Mr. Darcy and has regarded Jane Austen as the expert on all things romantic. So naturally when Emma falls for Blake Hampton and he invites her home to meet his parents, she is positive an engagement is in her future. After all, Blake is a single man in possession of a good fortune, and thus must be in want of a wife.

But when it turns out that what Blake actually wants is more of a hook-up than a honeymoon, Emma is hurt, betrayed, and furious. She throws herself deeper into her work as CMO of Kinetics, the fastest growing gym franchise in the nation. She loves her work, and she's good at it, which is why she bristles when her boss brings in a consultant to help her spearhead the new facilities on the East Coast. Her frustration turns to shock when that consultant turns out to be Blake's younger brother, Lucas.

Emma is determined not to fall for Lucas, but as she gets to know him, she realizes that Lucas is nothing like his brother. He is kind and attentive and spends his time and money caring for the less fortunate.

What she can't understand is why Lucas continues to try to push her back into Blake's arms when he so clearly has fallen as hard for her as she has fallen for him. It isn't until Lucas reveals to Emma that he was adopted into the Hampton family that she begins to understand his loyalty to Blake as well as his devotion to the child April-she is Lucas's biological niece.

Emma opens up to Lucas about the feelings of abandonment she has harbored ever since she was a child and her mother left the family. As she helps Lucas deal with his past demons, she is able to exorcise some of her own.

This book!  Where do I even start?

I'm a Jane Austen fan but perhaps not so big a fan as Emma is.  That may be a gross understatement but I am enough of a fan to greatly appreciate the Austen references and all the quotes at the beginning of the chapters.  I found great humor in Emma and her love/hate relationship with her Austen ideals.  Especially when she throws her book in the garbage only to dig it out a bit later, feeling ever so guilty.  Ha.

Yes, I had plenty of smiling, giggling moments with this book.  It was amusing and entertaining.  There were also plenty of moments of depth and challenge.  The characters deal with real life issues and struggles.  They are both weak and strong.  It's a fantastic balance and felt very true to life.  I loved the whole cast of characters and how everything changed, circled and evolved from beginning to end.  Speaking of the ending, I LOVED it.  It was like my heart let out such a big, happy and contented sigh.  "Finally", it said.

This will probably go on the list for one of my favorite books this year.  I really loved it.