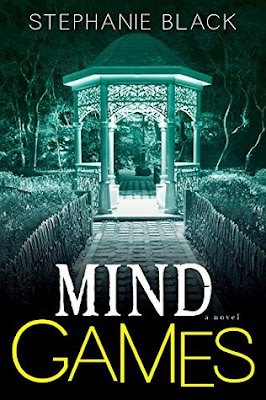 Psychologist Natalie Marsh’s dream is now reality: her mental health services clinic has opened and is housed in an elegant, newly renovated nineteenth-century building. Unfortunately, not everyone is happy with the clinic’s presence, including Heather Osbourne, a troubled young woman who wholly objects to the occupation of the building. Heather has spent years wandering the halls of the abandoned structure, convinced she’s communing with her ancestor’s ghost. When Natalie thwarts Heather’s attempt to leap from a window, the shaken psychologist soon realizes Heather’s failed jump is merely one piece of a disturbing puzzle. Greed and deceit are weaving a web around Natalie, and someone will stop at nothing—not even murder—to get what they want. Stretched to her breaking point, Natalie struggles to learn the truth, but only one thing is clear: nothing is as it seems.

This is a book I have rules about.  Number one:  don't read at night.  Number two:  don't read when you are alone.  Both of which I had to do for this book in order to get it read in time for my review.  I'm a wimp, no doubt about it and I really wish I would have kept to my rules.  😱

This book started out slow for me.  It took me a few chapters to get a grip on who the many characters were and what role they played.  I'd have to stop and think- wait, who is this?  I don't like having to do that.  By the middle of the book the intensity ramped up and things started happening at a faster pace.  I was thinking everyone was guilty, bad and lying!  The ending is very climactic!  (and it scared me)

Stephanie Black is so good at writing these suspense/thrillers.  What a mind she has.  I appreciate that she is able to write in this genre and keep it clean.

a Rafflecopter giveaway
Posted by Getting Your Read On at 8:59 AM